Many of the cultural traditions and artifacts discovered in Mississippian period archaeological sites in Georgia have strong similarities to cultural traditions in the west Mexican states of Nayarit, Jalisco and Colima. These traditions include the creation of circular pyramids, shaft tombs, dog effigy pots, human ancestral pair sculptures, and tree of life symbolism. Other artifacts discovered in Georgia have strong similarities to Olmec artifacts from the west Mexican states of Guerrero and Jalisco including bird man masks, three-pronged ceremonial maces, and jaguar deities. Migration legends of historic Muskogee Creek Indian tribes living in Georgia also suggest an origin in west Mexico.

Two of the most famous artifacts discovered in Georgia are the male and female human effigy statues found at the Etowah Mounds site. Carved from local marble and discovered buried in a log-lined tomb in the Funeral Mound (Mound C) at Etowah, they are believed to represent venerated ancestors. It is theorized that these statues were part of an ancestor worship cult that existed throughout the Mississippian time period.

A similar tradition of ancestor pair ceramic sculptures buried in specialized tombs is known from west Mexico. These sculptures were part of what is referred to as the Western Mexico Shaft Tomb Tradition.[i] Such tombs and their associated artifacts are distributed across the states of Nayarit, Jalisco and Colima in west Mexico. It should be noted that in Colima by 600 AD the ceramic figures had become solid and they also integrated stone elements with their gods’ representations.[ii]

In addition to the ancestral pair sculptures, dog effigy pots were also found buried in these shaft tombs. The most famous of the canine effigy pots are the Colima dog pots. These pots are thought to represent the Techichi breed. The Techichi was a small, mute dog that was fattened up to eat[iii]. The pots show the “fattened up” version of these dogs. The Techichi is the breed from which the Chihuahua is derived.

In Georgia a similar dog effigy pot showing a fat little dog was discovered at the Bull Creek site in Muskogee County. The pot includes a swirling design painted on its surface that suggests it was associated with the Creek Indian Wind Clan. Creek tradition holds that the Wind Clan was the most ancient clan among the tribe and the “aristocracy of all the clans.”[iv]

The breed of dog represented on the pot appears to be the Chihuahua. It has an upturned snout, bulbous forehead, erect ears and curved tail all consistent with the Chihuahua breed. The pot has been dated to 1325 AD.

Historical eye-witness accounts of Chihuahuas or Techichis in Georgia exist in the journal entries of Spaniards that were part of the Hernando de Soto expedition. This expedition travelled through Georgia in the 1530s. In several entries the Spanish mentioned that Georgia tribes raised a “little dog” to eat which they kept very fat for that purpose. Like the Techichi, the Spanish noted that this dog could not bark.[v] Later historians thought the Spanish accounts could have referred to opossums instead of dogs.[vi] Yet the eye-witness descriptions of these “little dogs” along with the Dog Effigy Pot from Bull Creek seem to confirm they were Chihuahuas.

In addition to ancestral pair statues and dog effigy pots another type of artifact found in west Mexican shaft tombs were tableaux. One such tableau from Nayarit shows a “multi-layered tree with birds.”[vii] The tree is uniquely stylized. A similar uniquely stylized tree with birds was found engraved on a marine shell in Craig Mound at Spiro, Oklahoma. The object, known as Tree of Life with Birds, is the only such design known to exist throughout the southeast.[viii]

The Spiro site, part of the Caddoan Mississippian Culture, is known to have had trade contacts with the Etowah Mounds site in Georgia. In fact, the population of Spiro moved away around 1250 AD[ix], the same time that a new population arrived at Etowah Mounds[x]. Is this a coincidence or did people from Spiro move to Etowah at this time? In fact, the funeral mound at Etowah was constructed after this 1250 AD repopulation of the site. It is in this funeral mound that we find the ancestral pair statues and other objects that seem to reflect the same west Mexican tradition as exemplified by the Tree of Life with Birds artifact found at Spiro.

Another artifact from the west Mexican state of Nayarit shows a model of a mortuary temple constructed on a mound covering a tomb. Similarly, a temple topped the funeral mound constructed at Etowah and within the mound were specialized log-lined tombs. (Continues…) 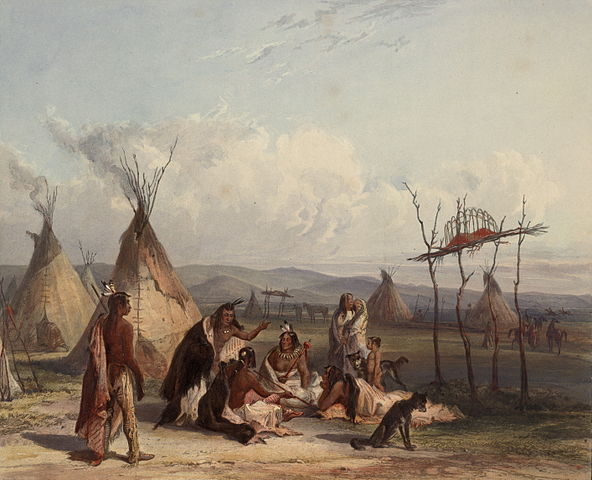