The Olmec were also known for the creation of jaguar motifs in their art. Likewise, the Underwater Panther was a major component of the Mississippian belief system.

The Underwater Panther was often associated with a swastika or swirling wind symbol. Swastica symbols are also known among the southwestern Puebloan tribes. Among the Hopi it is said to represent the wandering Hopi clans.[xvi] The Hopi also have many aspects of Mesoamerican religion within their culture (such as the horned water serpent) that are thought to have arrived via trade contacts with west Mexico. Interestingly, the swastika or swirling wind symbol is said to represent the Wind Clan among the Creek Indians who hold that this is among their most ancient clans.

As was mentioned previously the state of Guerrero is somewhat south of the aforementioned states of Nayarit, Colima and Jalisco. Although the Olmec stone carving is proof that they had reached deep into western Mexico it does not preclude the possibility that they also penetrated even further north into the aforementioned states where the west Mexican shaft tomb tradition originates.

Is there any evidence of Olmec influence there? In fact, there is. Archaeologists unearthed a jaguar-form vessel from a shaft tomb at a site called Los Coamajales in the Mascota Valley of  Jalisco that dates to between 1000-700 BC and is thought to be associated with the Olmecs.[xvii] Like the Underwater Jaguar it is shown bearing its teeth.

Also, pottery from Colima includes two distinctive forms that were also common to the Olmec: the acrobat form and the hunchback/baby form.

Similarity in cultural and artistic traditions is not the only thing that links the Creek Indians to west Mexico. The Creek migration legends also support a western origin for this tribe. The migration legend begins:

At a certain time the Earth opened in the West, where its mouth is. The earth opened and the Cussitaws came out of its mouth, and settled near by. But the earth became angry and ate up their children; therefore, they moved further West. [xviii]

What we can discern from this passage is that the Cussitaws originated in an area that experienced earthquakes. We can also discern that this location was not by the ocean because they were able to move further west, not possible if they were a coastal people. The legend says they returned to their original location and then, due to more earthquake activity, decided to leave again but this time headed towards the sunrise.  After following two rivers east the legend says they

heard a noise as of thunder. They approached to see whence the noise came. At first they perceived a red smoke, and then a mountain which thundered; and on the mountain was a sound as of singing. They sent to see what this was; and it was a great fire which blazed upward, and made this singing noise.

This clearly refers to a volcano. There have only been a few active volcanoes in North America over the past thousand years. But the first order of business is to determine the time period in which to look.

A clue from another version of the migration legend states that one of the first structures the tribe built when they arrived at their final destination in the east was a “mound [with a] great chamber in the center.”[xix] Such a “mound with a central chamber” referred to as an earth lodge was discovered at a site in Macon, Georgia known as Ocmulgee Mounds. In fact, Creek Indian tradition holds that the Ocmulgee Mounds site is the place where they “first sat down” after their long migration from the west.[xx] Thus the migration legend, Creek traditions, and archaeological evidence all seem to support the idea that Ocmulgee Mounds was the place where they built their “mound with a central chamber,” i.e., an earth lodge.

The Earth Lodge was found at Ocmulgee Mounds during excavations in 1938.[xxi] The earth lodge had been burned and archaeologists were able to date this charcoal to around 1019 AD. Thus we know the immigrants had arrived at Ocmulgee sometime before 1019 AD therefore we need a volcanic eruption before this time as well. 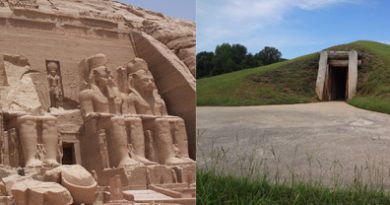