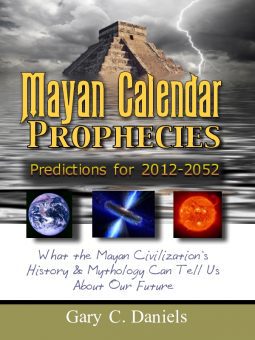 Mayan Calendar Prophecies: Predictions for 2012-2052 is a best-selling book exploring the ancient Maya and their two calendars, the Short Count Calendar and Long Count Calendar, and the prophecies, predictions, history and mythology surrounding these calendars. The book is divided into two parts. The first part of the book explores the only Mayan books of prophecy in existence which were known as the Chilam Balam. These prophecies were based on the Mayan Short Count Calendar and the belief that a 256-year cycle governed the rise and fall of civilizations. They developed this system by looking for patterns in their historical chronicles which documented thousands of years of Mayan history.  By carefully analyzing the events that happened in the past they were able to detect a pattern of repeating events that occurred on a regular cycle. Based on an analysis of these past events they were then able to make predictions about the future.

Mayan Calendar Prophecies argues that this analytical system developed by the ancient Maya may be grounded in science. While researching this book I discovered that modern science has also found various 250-year long cycles that could also impact the rise and fall of civilizations. For instance, scientists have found a 250-year solar cycle. Other scientists have shown that this solar cycle can impact rainfall patterns, insect infestations, and disease outbreaks. Curiously, most of the Mayan prophecies in their books of Chilam Balam are associated with famines and disease outbreaks. Therefore I argue in this book that Mayan “prophecies” were more like predictions and scientific forecasts than what one normally thinks of as “prophecies.” Usually prophecies are the result of visions or some type of divine intervention. Yet this does not seem to describe what the Maya were doing.

The first part of Mayan Calendar Prophecies does three things. First it explores the science of cycles and reveals the various types of cycles that researchers have uncovered. Second, it looks at the predictions recorded by the Maya in their books of Chilam Balam and back-tests them to see if they could have predicted known events from the past. Finally, once establishing the validity and accuracy of the Mayan forecasting models, I use the ancient Mayan predictions combined with an analysis of current events to determine the most likely scenarios for the future. This is, in fact, the exact technique Mayan priests used in making their predictions about the future and something most books on Mayan prophecy seem to completely ignore.

The second part of Mayan Calendar Prophecies explores the 5000-year Mayan Long Count Calendar as well as the history and mythology of the Mayan civilization.  I make special note that the Maya did not believe anything catastrophic was going to happen on December 21, 2012– the very last day of this 5000 year calendar cycle. Instead, I showed how they believed this was the end of one cycle and the beginning of another. The cycle that was ending on December 21, 2012 had begun 5000 years earlier seemingly coinciding with the rise of the first civilizations around the globe. Yet after careful research it appears that the earth suffered an enormous cataclysm 5000 years ago and this time period saw not the emergence of civilization but the re-emergence.

Based on a careful analysis of Mayan “mythology” as recorded in their hieroglyphic inscriptions, which actually recorded the exact date of this event, I was able to cross-check this date with data from various scientific disciplines such as ice core and sedimentary records to discover that yes, the earth did indeed suffer an unimaginable catastrophe 5000 years ago. And I show how this was recorded in world religions and mythology including that of the Maya. I concluded that this catastrophe was an impact between comet fragments with the earth which created massive mega tsunamis and nuclear-bomb-level fireballs which wiped out most traces of previous civilizations. And worryingly, it appears the earth runs into these fragments once every five thousand years. Thus the Mayan Long Count Calendar appears to encode this cycle as a way to warn the future.

Finally, I explore the origins of the Mayan Long Count Calendar and the myths surrounding its creator, Kukulkan. Kukulkan was supposedly a white, bearded foreigner who brought all the things necessary to create civilization including the calendar. I show how many countries including the Chinese also had legends that white foreigners helped them create their civilization. I also explore research that shows the great similarity between the Chinese and Mayan calendar and the surprising discovery of white mummies in a Chinese desert. One of these mummies was tattooed with the unique symbol associated with Kulkulkan. Could these be the people the ancient legends of the Chinese and Maya spoke of?

Thus Mayan Calendar Prophecies is more than just a book about Mayan Prophecies. It takes a deep look at Mayan history and how that history connects with world history and ultimately helps reveal the origins of the Maya, their calendar and the future of our own civilization.