Is there evidence that the Maya were in Georgia and Florida? If so, why were they there? Were they mining gold and shipping it back to Mexico? Does a gold artifact discovered in a Florida mound in the 1800s offer positive proof of this? Let’s look at the evidence and see what it suggests about the true goings-on in the southeastern U.S. before the arrival of Europeans.

Maya in Florida and Georgia?

A site in Florida called Fort Center near Lake Okeechobee offers the earliest evidence of corn agriculture in the eastern United States. The question naturally arises as to how corn, a Mexican plant, showed up in Florida before it showed up elsewhere in the southeast. If it came by land you would expect to see evidence of its cultivation in Texas, Louisiana, Mississippi and Alabama long before it arrived in south central Florida. The logical conclusion, then, is that it was brought by people who arrived by boat. The archaeologist who excavated the site, William Sears, asserted in his book/archaeological report, Fort Center: An Archaeological Site in the Lake Okeechobee Basin, that this is precisely how corn came to be at this site. But who brought it?

Interestingly, Lake Okeechobee was originally named Lake Mayaimi. It took its name from a tribe of Indians named the Mayaimi who lived around the lake. This is where the city of Miami gets its name. So in the same place where the first evidence of corn agriculture was discovered we find a tribe named Mayaimi. In nearby Cape Canaveral the Spanish recorded that a tribe named the Mayayuaca lived. Another nearby tribe recorded by the Spanish was the Mayaka. When the Spanish first reached the Yucatan in Mexico they encountered a tribe called Maia (Maya) living in a province called Maiam. Could the Maya have been responsible for bringing corn to Florida?

The migration legend of one Native American tribe, the Hitchiti, suggests this is the case. The Hitchiti migration legend as recorded in the book Creation Myths and Legends of the Creek Indians seems to place them in the Lake Okeechobee area after arriving on the coast of Florida:

Their ancestors first appeared in the country by coming out of a canebrake or reed thicket near the sea coast. They sunned and dried their children during four days, then set out, arrived at a lake and stopped there. Some thought it was the sea, but it was a lake; they set out again, traveled up stream and settled there for a permanency

At the time this legend was recorded, the Hitchiti lived in Georgia. Following this legend in reverse, the only place south or “down stream” from Georgia with a lake large enough to be confused with the sea is Lake Okeechobee. The fact they arrived at the sea coast suggests they arrived in Florida by boat.

More importantly, this legend states  that the Hitchiti’s ancestors came out of a “reed thicket.” The actual Hitchiti word recorded in the legend is utski which translates literally as “reeds.” In the Mayan language, “reeds” or “place of reeds” is a metaphor for a large city. For instance, the Maya referred to the great Mesoamerican metropolis of Teotihuacan as Puh which means “reeds.” The great Toltec capital of Tula was also known as a “place of reeds.” “Place of Reeds” served as a metaphor relating the masses of reeds in a marsh to the masses of people in a metropolis thus a metropolis became a “place of reeds.”

The Hitchiti migration legend reference to their ancestors coming from “reeds” suggests they were Maya who left a major city in Mexico and then arrived on the coast of Florida and temporarily settled near Lake Okeechobee before heading upstream and settling in Georgia “for a pemanency.” Interestingly, the Itza Maya referred to their ancestors as Ah Puh which translates as “Reed People.” Could the Hitchiti be descendants of the Itza Maya?

Mayan Words and Glyphs Among the Hitchiti?

If the Hitchiti were, indeed, descendants of the Itza Maya then there should be linguistic similarities between the Hitchiti and Mayan languages. And, in fact, there are. Chichen Itza, the great Mayan city in the Yucatan constructed by the Itza Maya, is translated as “Mouth of the Well of the Itza.”  Chichen means “mouth of the well” in Mayan with chi meaning “mouth” and chen meaning “well” as confirmed in an Itza Maya dictionary. According to a Hitchiti-English dictionary, chi also means “mouth” and chahni means “well” thus chichahni means “mouth of the well” in Hitchiti.  (For more linguistic connections read: “Mayan Words Among Georgia’s Indians?“)

The Maya also had a writing system believed to have been passed down from the Olmecs which used glyphs to convey sounds and sometimes concepts. If the Hitchiti were related to the Itza Maya then you would expect to find evidence of this writing system among this tribe. In fact, there is. A pottery tradition known as Swift Creek pottery existed in the same areas of Georgia where the Hitchiti language is known to have been spoken. Designs on this pottery are similar and some cases identical to Mayan glyphs and symbols in Mexico. More importantly, this pottery tradition begins around the same time that corn first showed up around Lake Okeechobee.

For instance, one of the most important symbols among the Maya was that of Kukulkan, the plumed serpent. According to David Smith in his article “Quetzalcoatl- The Plumed Serpent,” (Quetzalcoatl was the Aztec name for this deity) this symbol also makes an appearance on Swift Creek pottery:

More importantly, Smith argues that the duck bill on this version of Quetzalcoatl represents a wind deity known as Ehecatl-Quetzalcoatl. (A gold duck bill pendant discovered near Lake Okeechobee will be discussed later which further supports a Mayan presence in Florida.)

In his article “Swift Creek Design Investigations” that appeared in the book A World Engraved: Archaeology of the Swift Creek Culture, researcher Frankie Snow notes that another Swift Creek design has an “Olmec look.” This design which he described simply as “unidentified creature” bares a striking resemblance to the Olmec Jaguar glyph:

A quick perusal through the pages of A World Engraved reveals many other such designs. For instance, one design features a cartouche featuring two symbols, a diamond and cross. The fact that the Swift Creek potters decided to place both of these symbols in a cartouche reveals they believed these two symbols were closely associated. Among the Maya, these are both glyphs for the Mayan word Ek which means “star” or “Venus”:

Another Swift Creek design appears to represent another version of the Mayan Ek glyph:

And this is just the tip of the iceberg. (Read “Mayan Glyphs on Georgia, Florida Pottery” for a more in-depth discussion.)

This is what the FBI would call “evidence.”

Getting here from there- Yucatan to Florida By Boat?

Now that it seems clear there was a Maya presence in Florida and Georgia the next question that must be answered is were the Itza Maya capable of crossing the Gulf of Mexico and reaching Florida? According to researcher Douglas Peck, the Maya most capable of crossing open ocean were the Chontal Maya. In his paper on the Chontal Maya and their seafaring accomplishments he noted they were great seafarers and navigators who controlled all the coastal trade routes from Mexico down to Central America. They also made voyages into the Caribbean. Thus the Chontal Maya were the most likely candidates to have traveled to Florida bringing corn along with them. Which begs the question: who were the Chontal Maya and what was their relationship with the Itza Maya? (Continues…) 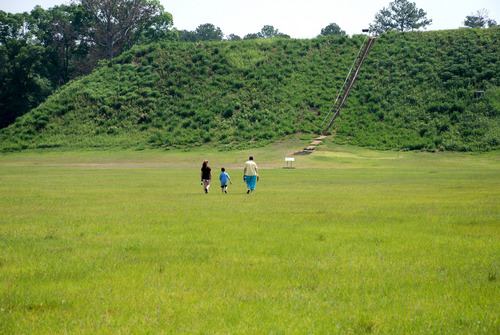 2 thoughts on “Were the Maya Mining Gold in Georgia?”