The Crystal River site in Citrus County, Florida has been shown to have a number of traits associated with the Maya civilization of Central America. Multiple archaeologists and researchers have noted the similarities for over 80 years. In my article “Mayan Glyphs at Crystal River Site in Florida,” I noted multiple Mayan deities including Kukulkan, the Feathered Serpent, and the Diving God or Descending Deity, were represented on pottery at Crystal River. To the above, I propose another type of pottery at the Crystal River Site is indicative of another Maya deity: Ix Chel, the moon goddess. 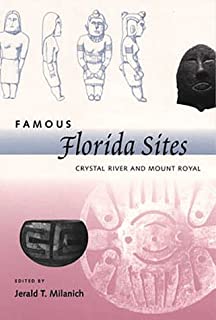 The pot in question was named Vessel 21 in 1903 by its discoverer, Clarence B. Moore. It was described in his report, “Mound Near the Shell-Heap, Crystal River, Citrus County,” that appears in the book, Famous Florida Sites: Crystal River and Mount Royal, as:

“Undecorated, save for four repousse´lobes each ending at the base in a foot for the vessel’s support.”

These “four repousse´ lobes each ending at the base in a foot” have the distinct look of female breasts. In the Maya world, this type of pottery is known as “mammaform tetrapods.” According to researchers at the University of Florida’s Florida Museum,

The dates of production in the Maya world, 50 BC-AD 250, are identical to the time period they first appear at the Crystal River site. There is no precedent for this type of pottery in Florida or anywhere else in the Southeastern U.S. before it shows up suddenly at the Crystal River site. The researchers also noted that this type of pottery was produced “throughout the lowland Maya region” although “the origin point of mammiform vessels remains unknown.” These researchers concluded that these vessels were associated with the Mayan moon goddess, Ix Chel:

“The symbolism of mammiform vessels is associated with the Maya moon goddess, later known as Ix Chel, who controlled monthly cycles, female fertility, and childbirth. Trade in these vessels also served as political currency in renewed alliances established after the decline of El Mirador at the end of the Late Preclassic in the Peten.”

I have argued that most of the religious imagery and symbolism at the Crystal River site is related to life, death and rebirth. Since the site was primarily a mortuary site featuring two large burial mounds, this is to be expected. Thus we have another Mayan deity represented at the Crystal River site that was associated with fertility and birth (and perhaps rebirth.)