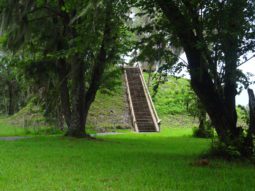 The Crystal River Archaeological State Park in Crystal River, Florida is a 14-acre park that preserves the remains of an ancient Native American civilization. The site features two burial mounds, several flat-topped pyramids constructed from seashells and limestone rock and two standing stones referred to as stelae by archaeologists. The site can now be toured virtually online here:

The Crystal River Virtual Tour features 360º panoramas inside the museum where you can see exhibits featuring artifacts from across 1000 years of the site’s history. The panoramas include clickable hotspots on some of the artifacts where you can see close-up photos for more detail. You can also watch a YouTube video of the short film that plays inside the museum’s theater. After touring the museum you can go outside and explore the various burial mounds and flat-topped pyramids constructed from shell and limestone rock. Finally, you can also explore the two stone stelae which include clickable hotspots featuring popup 3D models of each stela that allow you to rotate the stelae in all directions.

The virtual tour also features VR compatibility with a variety of both standalone VR headsets as well as inexpensive smartphone headsets. When viewing on your smartphone just click the goggles icon in the bottom right of the virtual tour screen and the screen will automatically split into two (left eye & right eye). Slide your phone into your smartphone VR headset and you can now tour the site as if you are really there.  Turn your head in any direction and the image on the screen will turn to match your movements. Staring at any hotspot will activate it thus no hand-controller needed. It’s the closest thing to actually being there.

Enjoy exploring the site for yourself with the Crystal River Virtual Tour.