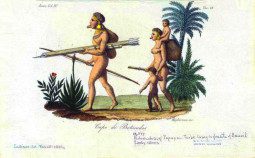 More evidence that ancient people were better seafarers than mainstream academics have given them credit for. The latest study shows Polynesian DNA found among tribes in Brazil. Why it is controversial within Academia that Polynesians made it to South America is quite bizarre considering they inhabited nearly every single piece of land in the Pacific Ocean no matter how remote. Just take a look at the location of Easter Island or Hawaii. These places are out in the middle of nowhere with thousands of miles of open ocean between them and the next island group. If Polynesians could find these little dots of land in this unimaginably large ocean it seems comical to think they would somehow miss North and South America! But that is, indeed, the mainstream position within Academia. But these latest findings should put those ideas to rest although I’m sure there will be a vocal reaction by the mainstream that questions the evidence, attacks the researchers and ultimately claim that “this proves nothing.” For the rest of us, the evidence seems overwhelming that ancient Polynesians made it to South America. Read the article below:

Polynesian DNA has unexpectedly been discovered in the bones of now-extinct Native Americans who once lived in the interior of Brazil. These surprising findings are raising a variety of suggested answers to how this occurred, including the travels of ancient seafarers or the more recent slave trade.

Molecular geneticist Sergio Pena at the Federal University of Minas Gerais in Brazil and his colleagues analyzed DNA from the Botocudo, who dwelt in what is now southeastern Brazil. They lived a nomadic, hunter-gatherer lifestyle, wore ornaments in their lips and ears Portuguese colonizers dubbed “botoques,” and were virtually entirely wiped out by the end of the 19th century during a war Portugal declared on all Native American tribes that did not accept European laws.

The researchers extracted DNA and partially sequenced the mitochondrial DNA from teeth obtained from 14 Botocudo skulls housed at the Federal University of Rio de Janeiro. Bewilderingly, in two of the skulls, they discovered mitochondrial lineages typically considered Polynesian.