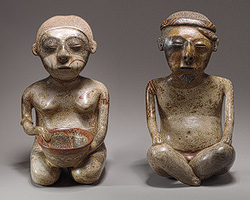 As stated in the previous discussion on Ocmulgee Mounds, it appears that the Muskogee Creek Indian tribe migrated from western Mexico into the southwestern U.S.. From here they ended up at the Spiro Indian Mounds site in Oklahoma and the Cahokia Indian Mounds site in Missouri and Illinois. Many artifacts discovered at Etowah Mounds were from either Cahokia or Spiro and many of these were very similar to artifacts from the Shaft Tomb Tradition in west Mexico such as ancestor pair statues, dog effigy pots and tree of life symbolism. For a more thorough and in-depth analysis of the evidence linking Etowah to the west Mexico shaft tomb tradition please visit our exhibit entitled “Were Georgia’s Muskogee Creek Indians from West Mexcio?” But here’s a quick overview of the evidence.

As just mentioned, archaeologists have noted that the elite at Etowah Mounds had a trading relationship with another important NativeAmerican Mississippian town known as Spiro Mounds in Oklahoma. Spiro Mounds is known for the amazing cache of artifacts that were unearthed in one of its prominent Indian mounds known as Craig Mound. One such artifact, an engraved marine shell known as the Tree of Life with Birds, is identical to a sculpture by the Nayarit people of west Mexico. (The Nayarit are also responsible for the aforementioned Ancestor Pair statues.)

Why did the elites at Etowah Mounds have contact with the elites at Spiro Mounds in Oklahoma, a distance of over 700 miles? Was this simply a trading relationship or was it something much deeper? Could Spiro Mounds have been ruled over by elites related to the elites at Etowah? There are oral traditions all over the southeast of tribes being ruled over by foreigners and these foreigners seem to be related to each other in some way. Could Spiro have been one of the first places the NativeAmerican Mississippians established themselves before continuing their migration east?

Elsewhere in Georgia archaeologists uncovered another piece of evidence which seems to link these immigrants to west Mexico: dog effigy pots. The dog effigy pot to the left is just one of many such pots discovered throughout Georgia and Tennessee. What is most intriguing is the breed of dog the pot appears to represent: a Chihuahua. (Read: Ancient Chihuahuas in Southeastern U.S.?) Note its short, upturned snout, bulbous forehead, and arching tail. No other dog breed except the Chihuahua has these particular combination of traits. Yet Chihuahuas are a breed that originated in the western Mexico state of Chihuahua so why do they show up on pots in Georgia? Similar pots from west Mexico also appear to show fattened Chihuahuas. Known as Colima Dog Pots, many of these pots also served as vessels with pouring spouts although not all did. The Colima dog pots are thought to represent the original Techichi breed from which modern Chihuahuas are derived. These little dogs were mute and kept fat to be eaten by the elite.

These three facts are important clues that further support a Mexican origin for the Muskogee Creek Indians. Why? Because when the first Spanish explorers with the De Soto expedition traveled through Florida, Georgia and Tennessee in the early 1500s they noted that the chiefs in this region would often offer them “little dogs” to eat which had been fattened up for that very purpose. The Spanish also noted that these dogs could not bark. This, along with the Bull Creek Dog Effigy Pot, would seem to support the fact that Indian tribes in this area were raising Techichis and Chihuahuas.

In addition to all of the above evidence, there is also linguistic evidence supporting this Mexican origin. The Nahuatl language was the language of the Aztecs and many other tribes in Mexico. In their language the word chichi means “dog.” Interestingly, Tomochichi was the first Native American leader that the British general Oglethorpe met when he founded Savannah, Georgia in the 1700s. In various documents Tomochichi is referred to as a “Dog King.” Tomochichi’s name breaks down into two parts:

Thus “Dog King” was an apt title and translation for Tomochichi. Since only the elite could eat dogs, the title “Dog King” represented someone of high social status. This title was probably used in the same way as when we say someone is the “top dog” or the “big dog.”

Furthermore, an important satellite village of Tama was known as Tamatli. A river in this area is known as the Nottely River. The “-tli” suffix is a known Nahuatl suffix for nouns as is “-tla.” Coincidentally, there was also a village named Tamatla. In west Mexico there happens to be a town named Tomatlan. The “-tlan” suffix means “place of” in Nahuatl thus Tomatlan means “Place of the Toma.” Another town in the same state located on the Pacific coast is known as Boca de Tomatlan and both of these towns are located on the Tomatlan River suggesting the entire region was once known as Tomatlan. Both of these towns are situated between the aforementioned states of Nayarit and Colima and shared in the same cultural traditions.

Yet Tomochichi was a Hitchiti Creek Indian and Tama a Hitchiti town, not Muskogee. As was discussed in the Kolomoki Mounds section it appears that the Hitchiti were Chontal-Maya who migrated to Florida by at least 200 AD. Thus why would they use a town name from west Mexico and why would they have Nahuatl words in their language? It is possible that Tama was originally a Muskogee-Creek town later captured by the Hitchiti and they simply kept the name. When the Cherokee captured Tamatli they also kept the name which is why there is now a group of Cherokee known as the Tomotley. Or there could be no relationship at all between Tama and Tomatlan, the similarities being coincidental.

Also, the Chontal Maya, like the Totonacs, spoke a language that included many Nahuatl words. Thus it would not have been out-of-the-ordinary for Hitchiti-speaking tribes to use Nahuatl suffixes like “-tli” and “-tla” when naming satellite villages.

Other town names also provide linguistic evidence for a Mexican origin. Old maps show a village named Callimako which means “Chief’s House.” (British maps also once called the Tennessee River the Callimako River because of this village.) Calli means “house” in Nahuatl and mako was the Hitchiti word for their Chief, thus Callimako = House of the Chief. Another village was named Chikimako which also meant “Chief’s House.” Chikee is a Hitchiti-Creek word for “house” but the Totonacs of Mexico also use the word chiki for “house.” The Totonacs speak a mixture of Nahuatl and Mayan. They appear to have borrowed the word from their Maya neighbors where chiki means “woven basket.” This is a fitting description of both Totonac and Hitchiti houses which both utilized wattle-and-daub construction whereby branches were interwoven to create a framework upon which clay plaster was applied to create the walls of their houses. Two other Hitchiti villages recorded by the De Soto expedition used chiki in their names, Cofachiqui and Cofitachiqui, thus we know the word was in use at least as early as the 1530s and not a later borrowing of the word during colonial times.(Continues…)

Were the Maya Mining Gold in Georgia?