Do three dog effigy pots excavated in Georgia in the 1930s at the Bull Creek Site and one from the Neisler Mound site represent the Chihuahua breed, a native dog of Mexico? Is the tribe most likely associated with these pots the Kasihta/Cussetta Creek Indians whose migration legends strongly suggest an origin in west Mexico, likely the state of Colima which is also known for similar dog effigy pots? 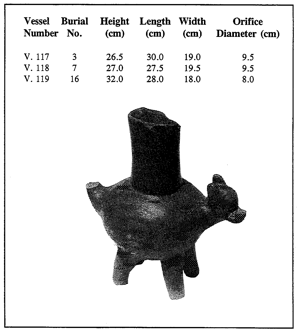 Did the Kasihta raise Chihuahuas for food which they fattened up for this purpose as depicted by the pots and as recorded by early Spanish eye-witness accounts? Finally, does this evidence overturn all the conjecture and theories of possible Old World influence on the origin of the Chihuahua and prove that it is purely a New World dog that dates back at least to 100 AD in Mexico?

In 1937 archaeologists unearthed three dog effigy pots from the Bull Creek site in Muscogee County, Georgia.  The final report on the site only devoted a few paragraphs to the discussion of these pots. The first discussion stated:

“Bottles from the Bull Creek site consist entirely of mortuary vessels…This category includes three bottles commonly known as the Bull Creek cemetery dog pots. Figure 156 shows the three vessels and three examples of similar vessels from other sites in the region. The three vessels from Bull Creek and the one vessel from Neisler Mound are considered the only known examples of this one type of negative painted dog effigy vessel.”1 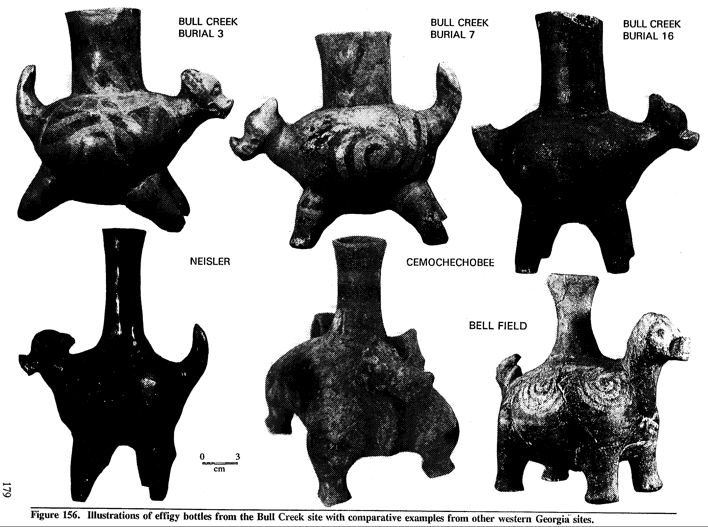 The dog pots were next discussed in the pottery types section of the report:

“The dog pots from Bull Creek included two varieties of painting. The two vessels from Burials 3 and 7 exhibited red spiral designs on a buff background. The third exhibited a black pattern on a reddish background. A third vessel is most similar to a dog pot recovered from Neisler Mound (see Figure 156).

Schnell has noted on several occasions that only four examples of the Bull Creek varieties of negative painted dog pots are known to exist (Schnell 1990:69). This conclusion has been reaffirmed through communications of both Schnell and the senior author with individuals knowledgeable of the antiquities market in the region. The recovery of three-fourths of the known examples of this vessel form from a single site, Bull Creek, does represent a unique occurrence.”2

One thought on “Ancient Chihuahuas in Southeastern U.S.?”