Does the Forsyth Petroglyph record the same astronomical event recorded in Temple XIX at Palenque and also depicted on the Mayan Blowgunner Vase?

Abstract: The hieroglyphic platform in Palenque’s Temple XIX records a comet breakup and impact event in 3300 BC. The same event was recorded on a Maya vase known as the Blowgunner Vase, which has been interpreted as a star map. The Forsyth Petroglyph appears to contain information found in both the Temple XIX inscriptions as well as the Blowgunner Vase and likely alludes to the same event. Additionally, the use of a Mayan glyph(s) (CHUM and/or YEH) and mythological symbol (CIPACTLI) on the Forsyth Petroglyph further links it to its Mayan counterparts and strongly suggests it was carved by Maya or Maya-influenced astronomers.

In a previous paper I argued that the Forsyth Petroglyph was a star map that recorded a comet breakup and impact event in 539 AD that coincided with a severe climate downturn at that time recorded in both historical records and the Greenland ice core.1 I have since found connections between the Forsyth Petroglyph and Maya “mythological” accounts of an event which happened near the end of the last Maya calendar that is also consistent with a major impact event. Evidence for this event is found in ice core, climate, and sedimentary records.

The event known as the Maya Flood Myth is the basis of much of Maya religion and mythology.2 The event is recorded in an inscription in Temple XIX at Palenque3 as well as on a Maya vase known as the Blowgunner Vase.4 The Blowgunner Vase has been argued to be a Maya star map.5 Coincidentally, it contains the exact same constellations in the same configuration as those on the Forsyth Petroglyph. Since the Forsyth Petroglyph and Blowgunner Vase show the most similarities I will compare them first.

The traditional interpretation of the Blowgunner Vase6 is that it illustrates a Maya myth wherein a figure known as Jun Ajaw, “One Lord” or “One Sun” uses a blowgun to shoot Itzam Yeh (“Itzam Revealed”), the Celestial Bird, out of the sky.7 The Celestial Bird is represented as a Quetzal bird. The glyphs on the vase below the blowgun read, “Itzam Yeh Descends (from) the Sky.”8

Others have taken the interpretation further and argued that not only does the vase record a myth but also serves as a star map.9  According to this interpretation, the tree in which Itzam Yeh is perched represents the bright band of stars of the Milky Way. The scorpion at the bottom of the tree represents the constellation Scorpio located in the sky next to the bright band of the Milky Way. The Serpent on the far right of the vase rollout is thought to represent the constellation Draco.

These star groups match the star map that I have argued exists on the Forsyth Petroglyph. The constellation Draco is unmistakably represented on the far right of the Forsyth Petroglyph just as on the Mayan Blowgunner Vase. The claws of the constellation Scorpio are represented on the left side of the petroglyph just as on the Blowgunner Vase.

Yet I’ve also argued that a comet is also represented on the petroglyph and this comet breaks into fragments. Does anything similar exist on the Blowgunner Vase?

In fact, there is. The Celestial Bird in the top of the tree likely represents a comet. The use of a Quetzal bird to represent this Celestial Bird is quite telling. The Quetzal is a bird from southern Mexico that has extremely long tail feathers. A bird flying across the sky with a long tail is a perfect symbol for a comet.10 The Chinese actually referred to one type of comet as a “long tailed pheasant star” showing that they, too, related birds with long tail feathers to comets.

The blowgunner, Jun Ajaw, shooting the Quetzal from the top of the tree thus represents the comet impacting earth. The Mayan glyphs below the blowgun read, “Itzam Yeh descends (from) the sky.” Thus the blowgunner scene is a clear reference to a comet which falls from the sky similar to the comet breakup recorded on the Forsyth Petroglyph. Curiously, the glyph for YEH, “revealed,” is nearly identical and in the same location (between Scorpio and Draco) as the incomplete star symbol on the Forsyth Petroglyph. I’ve interpreted this as a supernova on the petroglyph thus the Mayan verb YEH, “revealed,” is a fitting description of a star that appears out of nowhere.

This same symbol on the Forsyth Petroglyph also closely resembles the glyph for the Mayan word CHUM, “enthronement.” This is an important aspect of the Mayan Flood Myth as recorded in Palenque’s Temple XIX. The first event that takes place in this myth is the “enthronement” of God GI in the sky on March 10, 3309 BC. Curiously, the myths surrounding GI have him being born and enthroned multiple times. This has confused scholars but makes sense when one realizes that his enthronement in the sky is best explained as the appearance of a supernova in the sky.11  Supernova can brighten becoming visible and dim becoming invisible multiple times before they explode. Thus GI’s multiple births becomes explicable via an astronomical interpretation.

Just as YEH, “revealed,” was a perfect description of a supernova so is CHUM, “enthronement.” Most stars are always in the sky night after night thus they don’t “come to power.” They are simply always there. Only a supernova appears out of nowhere and takes its position in the sky, i.e., is “enthroned.” The fact that supernovas are usually so bright they are even visible during daylight hours is likely another reason they are said to be “enthroned,” since they are the “king” of the stars during their short reign in the sky.

A berrylium-10 spike shows up in the ice core records around 3300 BC12 which is the same time that God GI was enthroned in the sky. Such spikes are known signatures for supernova explosions thus the physical evidence supports this astronomical interpretation of God GI.

The most important symbol in the Temple XIX Flood Myth is the decapitation of a cosmic crocodile. In my book chapter, “Decoding the Mayan Flood Myth,” I argue that the cosmic crocodile represents a comet.13 Like a comet a crocodile has a head and a long tail. The decapitation event was likely a phenomena known as a “tail disconnection event” when a comet’s tail is torn off by a coronal mass ejection from the sun. In 2011 Comet Elenin exploded after being hit by a CME.

Interestingly, the blowgunner Jun Ajaw, “One Lord” or “One Sun,” is shown with three spots on his body likely representing sunspots. Sunspots only appear on the sun during active periods, which is also when solar flares and coronal mass ejections are possible. Perhaps Jun Ajaw’s blowgun represents the sun shooting a coronal mass ejection at the comet, which is responsible for bringing the comet down to earth?

The impact events represented in Palenque’s Temple XIX and the Blowgunner Vase happened around 3300 BC while the event recorded on the Forsyth Petroglyph likely happened around 539 AD. Yet scientists have noted that two major ammonium peaks in the Greenland ice core, signatures of cosmic impacts, stand out in the ice core record: one at 3300 BC and one at 500 AD. Thus the 500 AD event was similar to the 3300 BC event and likely revived the memory of this older event.

The fact that this “myth” was recorded at Palenque sometime after 500 AD further supports the idea that the 539 AD event revived the memory of this ancient catastrophe and resulted in it being recorded in various mediums including the vase and hieroglyphic platform. It appears this Mayan record of an ancient catastrophe was also recorded on the rock petroglyph known as the Forsyth Petroglyph in Georgia. The use of Mayan glyphs and mythological symbols on the petroglyph as well as the similarity in layouts between the petroglyph and the Maya Blowgunner Vase strongly suggest it was carved by Maya or Mayan-influenced astronomer-priests.

[This article is based on the research paper: Comparison of Forsyth Petroglyph, Mayan Blowgunner Vase and the Mayan Flood Myth from Palenque Temple XIX.]

[5] King, Timothy David. “The Blowgunner Vase as a Star Map.” The constellation system of the ancient maya. Stanford University.

[9] King, Timothy David. “The Blowgunner Vase as a Star Map.” The constellation system of the ancient maya. Stanford University. 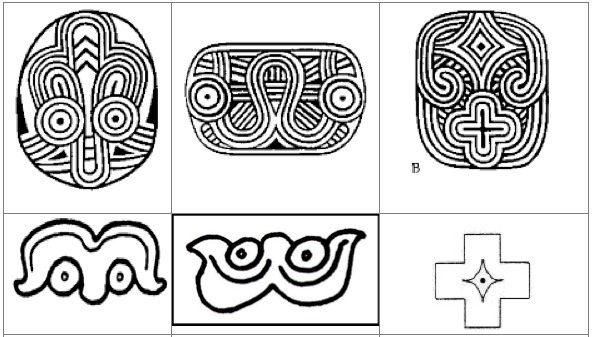