Over the past year there has been much debate about the possible presence of Maya in America, specifically in Georgia. Certain academics were quite vocal in their opposition to this idea stating emphatically that there was “no evidence” of a Maya presence in Georgia. So imagine my surprise when I stumbled upon this article from the magazine Archaeology dated to 2010. It clearly states that pottery from the Etowah site in Georgia had been found at the Mayan site of Tamtoc in Mexico. So why all the denials by academics over the past year that there is “no evidence” of a Mayan presence in Georgia? Were they unaware of this major research article in Archaeology magazine? Unlikely.

Furthermore, are we to believe that the inhabitants of Etowah went south but no Maya came north? The article below suggests just this sort of sillyness. The mental gymnastics academics will go through to avoid having the Maya in America is astounding as if there was some type of force field on the Rio Grande River that prevented people a thousand years ago from crossing it. But if this was a trade relationship then the influence likely went back and forth not just in one direction. Read an excerpt below from the Archaeology article to learn about the evidence of artifacts from Etowah (as well as Cahokia and Moundville) at the Mayan site of Tamtoc in northeastern Mexico:

This view looks eastward from the top of one of the long mounds above Tamtoc’s ceremonial plaza. The large ritual mound Cerro del Cubilete is on the left. (Courtesy Tom Gidwitz) 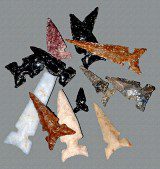 These projectile points, unearthed at Tamtoc, share a style common to points from the Mississippian culture that was prominent in what is now the Southeastern, Eastern and Midwest United States. (Courtesy Patricio Davila and Diana Zaragoza)

For decades, archaeologists have theorized that North America’s Late Woodland and Mississippian cultures drew inspiration from the Huasteca, but Davila and Zaragoza’s excavations at Tamtoc in the 1990s convinced them that cultural influence, and perhaps actual migration, spread from north to south. They unearthed objects that seemed to come from the American Southeast in about A.D. 900—a fragment of a sheet of hammered copper, a pointed metal hand tool, a piece of engraved shell, a cache of a dozen whole and twenty fragmented Cahokia projectile points, and pottery that could have come from sites to the north such as Etowah, and Moundville. When they dug into a terrace beside the site’s western mound, they found that, like the mounds at Cahokia, it had been piled up layer-by-layer in basket-sized loads, with dirt from pits that became the lagoons around the site.

“We dug and dug and dug,” says Davila, “but I understood nothing.” Then he read Garcilaso de la Vega’s La Florida del Inca, an account of the 1539 Hernando de Soto expedition to the Southeast. It describes huge Indian trade and war canoes that plied the waters of the Gulf of Mexico and the rivers of the Southeast. “We think there was a migration by sea,” says Davila.

Scholars have long recognized that both the Southeast and Huasteca had towns with artificial lagoons and platform mounds with thatched structures on top, engraved shell jewelry, imagery of feathered dancers, stone pipes, and ghostly pots that represent the dead with closed eyes, open mouths, and filed teeth. They have theorized that the cultural influence flowed from Mesoamerica northward, but the Tamtoc artifacts, other mounds in the Huasteca, and the region’s incised shell gorgets, post-date their earliest North American counterparts.

University of South Florida archaeologist Nancy White says that major cultural influences, as well as people, may well have traveled north to south. “We know other things may have moved from North to South America, things that may be considered less important or equally important, like tobacco.” The Mississippian motifs of the Late Prehistoric period that appear in the Huasteca do indicate that “at this late time people were probably moving around and sharing these ideas, but just a few things.” In the field, Martínez and Córdova want to see for themselves.