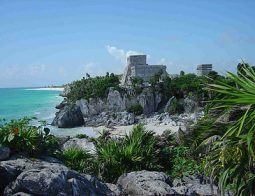 The Putun/Poton Maya were Central America’s most advanced mariners. They controlled coastal trade around the entire Yucatan peninsula down to modern-day Panama. One of their important ports was at Tulum in the Yucatan but this port had one major problem: there was only one small opening in the coral reef that lay just offshore. Michael Creamer, an avid sailor, theorized that the building known today as the Castillo was, in fact, a very cleverly designed lighthouse engineered by the Maya to guide mariners through this small gap. He also discovered this ancient lighthouse still works today. Learn more below:

The Castillo of Tulum.

From Galveston to Mexico

A newly passed captain taking a break from ELISSA, swimming in the turquoise Caribbean in front of the pre-Columbian Castillo at Tulum, the maritime historian in me asks, “Why is this building here; so precariously perched on the cliff’s edge?”  The search for an answer results in a National Geographic grant for an investigation by Pilar Luna and her team from the National Institute of Anthropology and History (INAH) and subsequent documentation by the Discovery & History Channels. Tulum turns out to be the oldest, most sophisticated lighthouse in the Americas.

Tulum may have served as a port city for the Maya site of Coba as there is a sacbe road connecting the two.  However, it was more likely a principal way station along a Putun Maya ocean trade route stretching from Panama in the South to Champoton on the Gulf of Mexico to the North.  Called the Phoenicians of the New World by archaeologist Eric Thompson, the Putun had a monopoly on Western Caribbean sea trade in the year 1000CE (Fig.1).

Tulum’s location to the Southwest of the principal Putun entrepot of Cozumel Island meant that large, ocean going canoes could depart for Cozumel almost no matter what the weather, nor how strong the Northbound current, which forms the beginnings of the mighty Gulf Stream, was running at the time.  The substantial landside fortifications of Tulum are more in keeping with coastal island’s requirement for a secure port on the mainland (Fig. 2), as the modern municipality of Isla Mujeres maintains Punta Sam and Cozumel formerly administered Playa del Carmen.

The Secret of Tulum was rediscovered in 1982 by amateur nautical archaeologist Michael Creamer.  In 1984, representing the Institute of Nautical Archaeology (INA)  he joined an expedition led by Pilar Luna of Mexico’s National Institute of Anthropology’s Nautical Archaeology and History (INAH) funded by a grant from National Geographic. Professor Luna’s team conducted experiments that demonstrated Tulum’s El Castillo served as an aid navigating the narrow gap in the offshore coral reef (Fig. 3) that protects Tulum’s convenient landing beach (Fig 2).  The experiments were later successfully repeated on several occasions and documented on film for Arthur C. Clarke’s Mysterious Universe –‘The Mysterious Maya for Discovery Channel’ (English) and History Channel (Spanish).