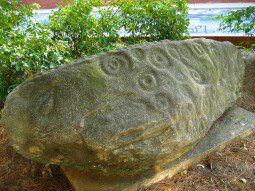 View of the Forsyth petroglyph at the University of Georgia. (Courtesy Flickr)

Visitors to the University of Georgia in Athens will find two petroglyph boulders on the campus grounds. One is located next to the Museum of Art. The other is within an enclosed garden at the School of Law. These petroglyphs were removed from their original locations in the 1960s. The original location of the stones was near Cumming, Forsyth County, Georgia. The petroglyphs are carved on coarse crystalline granite. Design elements include concentric circles, stick figures, and cupules. It is possible these petroglyphs had astronomical meanings. (Read: “Forsyth Petroglyph Reveals Comet Impact?“) Archaeologists believe that the petroglyphs were made by ancestors of the Creeks or Cherokees dating back to Late Woodland period (c. AD 1000).

The skeleton of a giant North American sloth that roamed coastal Georgia 14,000 years ago has been assembled at the University of Georgia. Measuring about 13 feet in length and weighing between 2,500 and 3,000 pounds, the skeleton is the first of a prehistoric animal ever put together in Georgia and only the fourth North American ground sloth known to have been mounted anywhere. The bones, discovered in 1970 during the construction of Interstate Highway 95 near Brunswick, were excavated by college students. The skeleton is on display in the Boyd Graduate Studies Research Center on the campus. 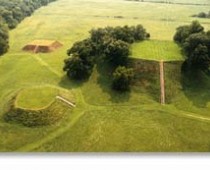 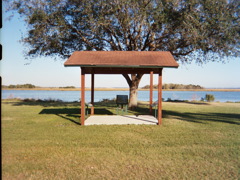 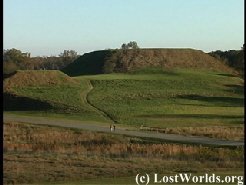