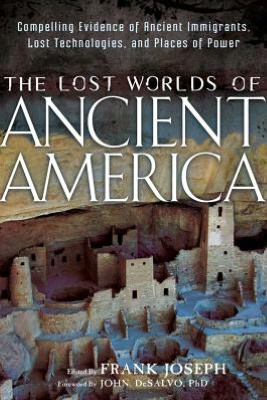 The Lost Worlds of Ancient America is a collection of research papers by writers who offer an alternative view of the prehistory of the Americas. The book claims to offer “compelling evidence of ancient immigrants, lost technologies, and places of power” in ancient America before the arrival of Columbus.

Edited by Frank Joseph, the highly controversial editor of Ancient American magazine, the book includes forty-five chapters divided into four parts. Part I is titled “Physical Proof” and focuses on artifacts discovered in the New World that have a possible Old World origin. Some of these artifacts include a “Los Angeles monolith” that bears resemblance to Phoenician artifacts and Roman coins found in the Midwest.

Part II is titled “Sites” and focuses on archaeological sites in the New World that appear to show connections to sites in the Old World. Articles include titles such as “Great Serpents from Kansas to Scotland,” “A Templar Tower in Rhode Island,” and “Libyans’ 3rd-Century Eclipse in Kentucky.”

Part III is titled “Ancient American Hi-Tech” and focuses on artifacts and archaeological sites that appear to represent evidence of high technology in the ancient Americas. Some of this evidence includes artifacts suggesting ancient aviation in the Andes, superhighways in West Virginia, and possible knowledge of electricity in pre-Columbian America.
Part IV is titled “Foreigners in Prehistoric America” and focuses on evidence of pre-Columbian contact between the Old World and New World. Articles include such titles as “Genetics Rewrites American History Textbooks,” “Odysseus Sailed to America,” and “Kelts in Pre-Columbian Ohio.”

The Lost Worlds of Ancient America presents evidence of varying quality some more convincing than others but overall succeeds in raising interesting questions about the true history of the Americas before Columbus. This is not a scientific text and thus one must approach it with an open but critical mind. Discriminating readers will certainly have little difficulty separating the wheat from the chaff and will come away with, at the very least, knowledge of artifacts and archaeological sites of which they were previously unaware.

Disclosure of Material Connection: I received this book free from New Page Books. I was not required to write a positive review. The opinions I have expressed are my own. I am disclosing this in accordance with the Federal Trade Commission’s 16 CFR, Part 255 : “Guides Concerning the Use of Endorsements and Testimonials in Advertising.”

Evidence of Foreign Invasion of Georgia in 1100 AD?