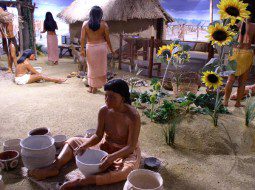 A new discovery unearthed at Angel Mounds near Evansville, Indiana is helping to reveal new secrets about this mysterious culture. The discovery is a pot which was found whole, a rare event in archaeology. From a newspaper article on the find:

So, when the Indiana University Field School found an intact jar during a dig at Angel Mounds State Historic Site this spring, the group was really happy.

McGill added it was a spectacular find.

The jar is about 15 inches tall and 12 inches across and can hold about three gallons of water. The use of the jar by the Native Americans who once occupied the Angel Mounds site is unknown.

About Angel Mounds from Wikipedia:

From 1100 CE to 1450 CE, people of the Middle Mississippian culture built and lived in a town on this site. They were known for building characteristic earthwork mounds, with shapes including platform, conical and ridgetop (as seen at Cahokia.) Angel Mounds was a chiefdom (the base of the chief) and the regional center of a large residential and agricultural community that extended for several miles around. They built a major earthwork, working with a variety of soils to create a stable mass. The platform mound held their central community. They traded with other chiefdoms and peoples along the Ohio and Mississippi rivers. This settlement was the largest-known town of its time in Indiana. Scholars believe the town may have contained as many as 1,000 inhabitants at its peak.