All that’s left today are the mounds. 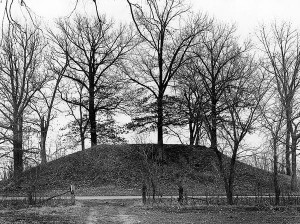 On one of many pinnacles along the bluffs lining the Missouri River
southwest of Columbia, atop the steep face of jagged rock plunging to
the landing, there is an inconspicuous 10-foot lump of earth. What
appears to be a natural point in the landscape ˜ insignificant in the
swath of hills and valleys ˜ is a burial mound, formed by human hands
thousands of years ago.
American Indian burial mounds abound in mid-Missouri, especially along
the blufftops of the river. Many date back 2,000 years or more to what
is called the Woodland Period, from about 500 B.C. to about A.D. 900.
With developer Jose Lindner’s purchase of the former W.B. Smith Feed
Mill and Hatchery property ˜ 1,024 acres between the city and the
river ˜ government officials say city annexation is inevitable. And
others say if planning doesn’t precede development, the future of the
burial mounds along the blufftops is uncertain at best. Few protections
exist for the prehistoric sites. The federal legislation meant to
protect them only applies to development projects that are on federal
land or use federal money. State protection only applies to “known”
prehistoric sites. But without an official database, many sites only
become known when construction runs into them, at which point
archaeologists say the damage is generally already extensive.