Just because something’s been published by a “scientist” doesn’t mean it’s fact. The story below is one example. For one hundred years archaeologists have been repeating a lie about the origins of the stone used to create pipes found at one Hopewell Culture site in Ohio. The original archaeologist assumed the pipes were made from local stone but didn’t actually test this to make sure it was true. The stone actually was sourced from a quarry in an entirely different state (Illinois) but not one archaeologist ever bothered to question the original assertion and so for one hundred years they all dutifully repeated the same falsehoods as if they were fact. As the principal investigator notes in the article below:

“This is how mythology becomes encased in science…This study really says to the archaeological community, you need to go back to the drawing board….You’ve been telling stories for decades that are based on essentially misinformation.”

How many other archaeological falsehoods based on assumptions and assertions will be overturned in the future? Read the story below for the details:

CHAMPAIGN, lll. — In the early 1900s, an archaeologist, William Mills, dug up a treasure-trove of carved stone pipes that had been buried almost 2,000 years earlier. Mills was the first to dig the Native American site, called Tremper Mound, in southern Ohio. And when he inspected the pipes, he made a reasonable – but untested – assumption. The pipes looked as if they had been carved from local stone, and so he said they were. That assumption, first published in 1916, has been repeated in scientific publications to this day. But according to a new analysis, Mills was wrong.

In a new study, the first to actually test the stone pipes and pipestone from quarries across the upper Midwest, researchers conclude that those who buried the pipes in Tremper Mound got most of their pipestone – and perhaps even the finished, carved pipes – from Illinois.

The researchers spent nearly a decade on the new research. They first collected the mineralogical signatures of stone found in traditional pipestone quarries in Illinois, Kansas, Michigan, Minnesota, Missouri and Ohio. Then they compared the material found in those quarries to the mineralogical makeup of the artifacts left behind by the people of Tremper Mound.

Less than 20 percent of the 111 Tremper Mound pipes they tested were made from local Ohio stone. About 65 percent were carved from flint clay found only in northern Illinois and 18 percent were made of a stone called catlinite – from Minnesota.

The researchers are still puzzling over how most of these materials made it to Ohio from Illinois, and are baffled by another new discovery. Pipes from a site only about 40 miles north of Tremper Mound, an elaborate cluster of immense mounds known as Mound City, were carved almost entirely from local stone. Mound City was inhabited at about the same time or shortly after Tremper Mound, and the pipes found there are stylistically very similar to the Tremper pipes.

The researchers describe their findings in a paper in American Antiquity.

These results should remind archaeologists that things are not as simple as they sometimes appear, said Thomas Emerson, the principal investigator on the study and the director of the Illinois State Archaeological Survey (ISAS) at the University of Illinois.

“This is how mythology becomes encased in science,” he said.

The study also confirms that the people who produced these pipestone artifacts, known today as members of the Hopewell tradition, were more diverse and varied in their cultural practices than scientists once appreciated, Emerson said. 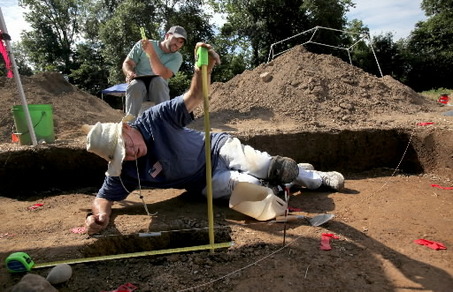