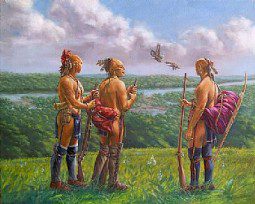 The Shawnee are one of the most important Native American groups in North America due to their long standing and far flung trade networks. They had trading outposts throughout eastern North America from the Great Lakes to Florida. One site known as Shawnee Lookout in Ohio appears to have been continuously occupied by the Shawnee for over 2,000 years. It is also much larger than the original 1960 archaeological investigations revealed. Read an excerpt from the news report here:

The discoveries continue to surprise for a team of UC students digging in Shawnee Lookout Park, with a major new mound being located and a rare kiln used to fire pottery excavated in recent weeks, along with even more evidence emerging to support the theory that the site could be the largest continuously occupied hilltop Native American site in the United States.

But perhaps most importantly from this year’s work, evidence was also found to bolster the theory that Shawnee Lookout was the largest continuously occupied hilltop settlement established by any Native American group. The dating of recent evidence found argues for cultural continuity at the site, meaning the Hopewell who lived at Shawnee Lookout up to 2,000 years ago are showing direct links to the Shawnee people who were living on the site less than 300 years ago.

Work this summer was conducted by a group of more than 20 students working in the Hamilton County Park District property in southwestern Ohio as part of UC’s Ohio Valley Archaeology Field School. Much of the summer was devoted to excavating the remains of structures, dwellings about the size of a modern-day ranch house, says UC Assistant Professor of Anthropology Ken Tankersley, who oversaw work at the site this summer.

“The site we were working at had been previously looked at back in the 1960s and was considered a small village site,” Tankersley says. “This summer we did an extensive survey of the site, and it is so densely vegetated, you can understand how there were features that were missed. We found a number of mounds at other sites around the park. While it had always been thought that there were about 40 archaeological sites in Shawnee Lookout, it now looks like there are many, many more.”