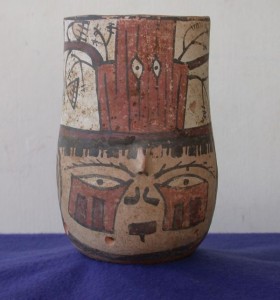 Images of disembodied heads are widespread in the art of Nasca, a culture based on the southern coast of Peru from AD 1 to AD 750. But despite this evidence and large numbers of trophy heads in the region’s archaeological record, only eight headless bodies have been recovered with evidence of decapitation, explains Christina A. Conlee (Texas State University). Conlee’s analysis of a newly excavated headless body from the site of La Tiza provides important new data on decapitation and its relationship to ancient ideas of death and regeneration.

As Conlee outlines in the June issue of Current Anthropology, the third vertebrae of the La Tiza skeleton has dark cut marks, rounded edges, and no evidence of flaking or breakage, indicating decapitation occurred at or very soon after the time of death. A ceramic jar decorated with an image of a head was placed next to the body. The head has a tree with eyes growing out of it, the branches encircling the vessel.

“Ritual battles often take place just before plowing for potato planting, and trees and unripened fruit figure in these rituals, in which the shedding of blood is necessary to nourish the earth to produce a good harvest,” Conlee writes. “The presence of scalp cuts on Nasca trophy heads suggests the letting of blood was an important part of the ritual that resulted in decapitation.”