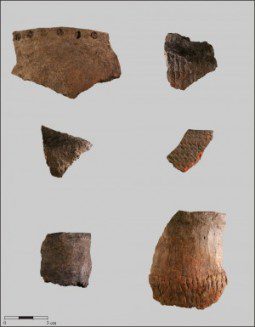 OAKVILLE, Iowa — The prehistoric Indian village that was excavated near here a year ago has been covered up again, but analysis of what was found will take several more months, and the questions raised may never be answered.

A portion of the village — determined to be a “significant” cultural site — was excavated and some 100,000 artifacts removed as part of a process of rebuilding a levee that broke during flooding on the Iowa River in 2008.

The reason the site was deemed “significant” is that it is largely undisturbed and it is of a culture that “is not greatly represented in the record” — that is, not many sites like it have been excavated before, Jim Ross, U.S. Army Corps of Engineers archeologist, said.

Researchers believe it is a village of the Weaver cultural tradition that existed around 320 A.D. (that’s 1,700 years ago) with 150-250 people living in 20 to 25 branch-and-bark wigwams arranged in a circle, or ring, around a plaza. They are believed to have lived there about 10 years.

— The pottery found at the site has very little decoration, compared with a high level among people living just before this time period. Why? Why did this complexity vanish?

— Evidence suggests that this people did very little trading, compared with extensive trading among people living just before them. Again, why?

Whereas earlier sites revealed copper, shells and non-native chert (a type of rock used to make tools) indicating that the people traded with others all over the Midwest, this site revealed only a little non-native chert, and that may have been a holdover from earlier days, not a reflection of trading, Benn said.

What happened to change trading patterns?

People during this time period cultivated plants for food; researchers are sifting through evidence to see if this village might have added to the list; in other words, that there was an intensification of agriculture.

The final report of findings is to be submitted to the Corps by the end of this year.

As for the artifacts that were removed, the Corps is working with the landowner — who by law owns them — on an agreement in which some will end up at the Office of the State Archeologist in Iowa City, where they will be available to researchers, while others will be put on display at local museums, Ross said.