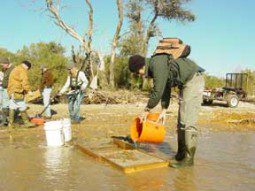 Greenwood Island on the western side of Bayou Casotte in Pascagoula has long been known for its Native American history. Now, archaeologists have dated that history to 1000 B.C., and said that pottery shards found there are the oldest known specimens uncovered on the Mississippi coast.

The findings were released by Carey Geiger, president of the Southwest Chapter of the Alabama Archaeological Society, based on his study of artifacts recovered from the island over 40 years by an unnamed Pascagoula searcher and during a 1997 excavation by University of South Alabama archaeologists from Mobile.

Geiger, a retired chemist with the Pascagoula Chevron Refinery, has been volunteering with the university’s Center for Archaeological Studies since 2006.

Geiger discussed his study during a presentation last week at the university, showcasing several of the artifacts, which include arrowheads and pieces of pottery.

Charcoal found with the pottery, discovered in the basal-clay layer of soil, was carbon dated to 1000 B.C., Geiger said.

“We traced it back to what we call the Norwood series of pottery,” also discovered in digs in northwest Florida, Geiger said. “It was the first Indian ceramics in this area, called fiber-tempered,” he said.

He explained that fiber-tempered pottery is created of clay and, most likely, Spanish moss and then heated by fire.

Geiger believes that the findings provide a key insight into Greenwood Island’s past.

“According to field notes, it was found only with oyster shell, charcoal and dirt,” he said. “It was right on the basal clay, which would indicate they were the first people there.”

The island is also historically significant in the context of the U.S. military. In 1848, the Army, returning from the Mexican-American War, chose Greenwood Island as a camp and hospital due to overflow from New Orleans. It was named Camp Jefferson Davis, and Geiger said as many as 20 soldiers may be buried there, based on an 1895 report by the government.

According to a representative with the Jackson County Historical Society, the remains of two soldiers were discovered on the island in 1979 and interred at Biloxi National Cemetery a decade later. Most recently, remains were discovered in two coffins during low tide, and are being studied by archaeologists with the University of Southern Mississippi.

Although he said he is not an opponent of industrial development, he believes Greenwood Island to be of tremendous importance archaeologically especially considering the Native American findings.