The Hitchiti language, one of many languages spoken by Creek Indians, was spoken in Georgia and Florida during the Colonial Period by tribes including the Hitchiti, Chiaha, Oconee, Sawokli, Apalachicola and Miccosukee. Based on the number of place names derived from the Hitchiti language, scholars believe this language was once spoken over a much larger area of Georgia and Florida than it was during colonial times.1

The Totonacs likely borrowed the word from their Maya neighbors where the word means “woven basket/container.” In fact, the Mayan word refers specifically to one type of basket, those made with split cane or similar woody material. Since Totonac homes consisted of a substructure of interwoven tree limbs and saplings with an overcoat of stucco-like clay (referred to as wattle-and-daub construction), “woven container” is a fitting description for these homes. The Hitchiti chikee was a four post design with no exterior walls but instead used mats woven from split cane material to create partitions and blinds. Again, we see that “woven container” is an appropriate description of these homes as well. (“Container” was a common euphimism in Mayan for “house.” For instance, in the Mayan dialect of Chol ‘otot is usually glossed as “house” but has been shown to have “a wider range of meanings as ‘container.’”)4

Chikee was the name of the summer house for Hitchiti-speaking tribes. They also had a winter house that had thick walls to better keep in heat. They called this house a tcokofa or “hot house.”5 In Mayan choko means “hot.” The word is still used in modern Muskogean and is chukopa which means “warm place,” where chuko means “warm” and pa means “place.” 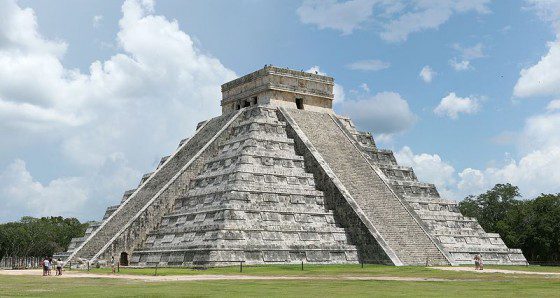 Other Mayan words also appear in Hitchiti dictionaries. Chi is the Hitchiti word for “mouth.” Chi also means “mouth” in the Itza dialect of the Mayan language. One of the Itza’s most famous cities was Chichen Itza. Chichen is translated as “mouth of the well” with chi meaning “mouth” and chen meaning “well.” Chahni means “well” in Hitchiti thus chichahni would mean “mouth of the well” in that language. 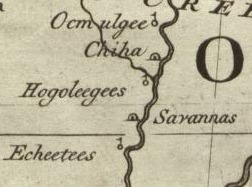 The next entry in the Itza Mayan dictionary after chi is chiaha-eh  which translates as “water’s mouth” or “water’s edge.” Chiaha, sometimes also corrupted as Chehaw and Chiha6, was a common town name among Hitchiti Creek Indians7 whose villages were located beside rivers and streams. The earliest record of a town by this name appears in the journals of the De Soto expedition who visited a town named Chiaha that was located on an island in the middle of a river.8 Thus “edge water” is an appropriate description of these villages. 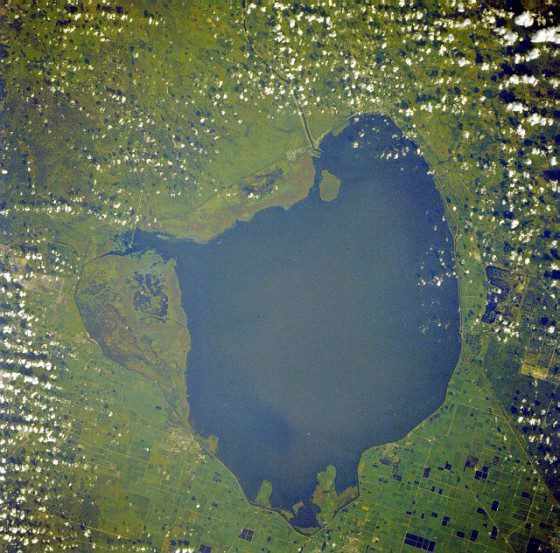 Interestingly, the area around Lake Okeechobee in south central Florida was known as “Chia”9 and the people who lived there were called the Mayaimi. One researcher theorized, based on absolutely no evidence, the word meant “high place” but due to its use for the area surrounding Lake Okeechobee it seems more likely a corrupted form of Chiaha, “chi-ha,” meaning “edge water.”

The –ha suffix was a way in which the Mayan language denoted water. Similarly in Georgia and Florida there are many rivers and lakes with Hitchiti names that end in ha such as the Altamaha River in Georgia, Ocklawaha River and Lake Hatchineha in Florida. This suggests that they also used this suffix to denote water but only with further research can we be certain.

The Mayan word for blood is ch’ich. According to anthropologist and linguist John R. Swanton, the Natchez word for “blood” was i’cha which, although different from the usual Creek word, reappeared in Hitchiti as ichikchi.10 The Hitchiti dictionary lists pichikchi for “blood.” Yet it also lists the prefix pichi as “to give” thus it is likely pichikchi actually means “to give blood”  and Swanton’s ichikchi is the correct word for “blood” in Hitchiti.

The Hitchiti word bih means “head-chief” and the head chief was known as the Great Sun. Early eyewitness accounts of the Natchez noted that each morning the Great Sun would smoke a pipe and blow the smoke towards the sun (center) and then to the four directions.11 Thus we see that the Great Sun is associated with the five directions.

Among the Maya the quincunx design consisting of five dots represented the four directions plus a center direction. In Mayan this design has the phonetic value bi or be.12 It is often integrated in the k’in glyph which means “sun.” Thus, like the Maya, the Hitchiti word bih is associated with both the sun and four directions.

The Hitchiti word for rattlesnake, chintmigun, translates literally as “snake chief.” Likewise, “in many Mayan languages the word for ‘rattlesnake’ is composed of the word for ‘snake’ preceded by aha(w) (lord).”13 So, although the actual words are not the same, the ideas are identical.

The typical scholarly argument suggests these are just coincidences or at the very least very recent additions to the Hitchiti language during the colonial period. The argument goes that if they were truly ancient then they would have changed in the intervening years.15 Yet recent linguistic research shows this is not the case. In fact, researchers showed that “the frequency with which a word is used relates to how slowly it changes through time, so that the most common words tend to be the oldest ones.”16 Chikee or “house” is certainly a very common word thus it could easily have survived the ravages of time unchanged.

In fact, the word was already part of several place names when the first Spanish explorers entered the southeast in the early 1500s. The conquistador De Soto recorded a town named Cofachaqi and Cofitacheqi in his journals. Nearly five hundred years later the word is still in use among the Seminole and Miccosukee with zero change.

Why do several seemingly Mayan words appear in the Hitchiti language? How many other such words are there? In his article, “The Natchez, an offshoot of the civilized nations of Central America,” famed early Mayan scholar, Dr. D. G. Brinton, noted over 100 words of Mayan origin.17 In  his article “Maya stock and Mexican languages,” Carl Herman Berendt, acknowledged as “undoubtedly the greatest scholar of the Mayan language,”18 also compared Maya with Natchez. In Miscellanea Maya in the Berendt Linguistic Collection, No. 179, Berendt showed similarities between Natchez, Apalachee, and Mayan.19

In his article, “On the Language of the Natchez,” Brinton later backtracked somewhat from this position and noted, “It is very evident…that the Natche is a dialect of the Maskoke or Creek…with a small percentage of totally foreign roots.”20 But then notes, “The body of roots wholly dissimilar from any I have been able to find in the Chahta-Maskoke dialects, embraces a number of important words, and makes up a sufficiently large percentage of the language to testify positively to a potent foreign influence.”21 He did not speculate as to whom this foreign influence might be but it seems reasonable to assume that, based on his previous writings, the Maya were one likely candidate.

Brinton also noted that among the Natchez, the commoners spoke one language, referred to as the “stinkard language,” while the elites spoke another. As Brinton notes, “The Natchez offered one of several examples among American Indians where in the same community two independent tongues were employed, one by the nobles, the conquerors, another by the vulgar, the conquered.”22

Although, again, Brinton would later question the idea of two separate languages, the legends of several tribes suggest they were, in fact, ruled over by foreigners who lived atop the earthen pyramids scattered throughout the region.23 These foreigners were always referred to as a “priestly clan.” Among the Cherokee they were known as the Ani-Kutani and among the Choctaw the Unkala. The Choctaw legends stated they controlled an important temple called the “House of Warriors” and “chanted hymns in an unknown tongue.”24 Some legends even noted that these foreigners came from the sea and maintained rule within a single family for thirteen generations before dying out.25 The Cherokee claimed to have massacred the foreigners who ruled over them.

Were these “priests” actually nobles of Maya descent ruling over local indigenous tribes? Does this explain why only certain Mayan words such as for “blood,” “house,” “head chief,” et cetera, showed up in the commoners’ language?

Another clue that may help determine the most likely source of this foreign influence arises from symbols that appeared on pottery in Florida and Georgia around 200 AD. Known as Swift Creek pottery, these symbols were similar and, in some cases, identical to Mesoamerican symbols and Mayan glyphs. For more info read: “Mayan Glyphs on Georgia, Florida Pottery?”

Work in progress. For more information visit: Maya in America- The Untold Story of Ancient America.

[References cited can be found on the original paper: “A Mayan Connection to Florida and Georgia Indians?“]

One thought on “Mayan Words Among Georgia’s Indians?”