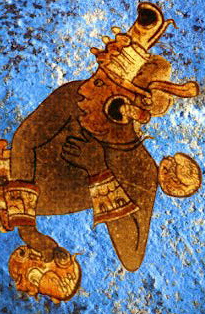 One of the many mysteries involving the ancient Maya is the origin of a blue pigment they used to paint murals and buildings. Archaeologists have searched far and wide for the source of this pigment. It now appears that the largest source of the clay that makes this pigment can be found in southwest Georgia. This is the same location of the Kolomoki Mounds site which I’ve argued had a strong Mayan influence. This was the most populous site north of Mexico during its time period and it collapsed at the same time as Teotihuacan in Mexico. Archaeologists have long wondered why such a populous site was located in such an isolated location. With the discovery of the nearby source of Maya blue pigment, this mystery may now have been solved. Read the news below:

In a moment of boredom this week, a documentary film maker, whose passion is the archaeology of the Americas, probably solved a riddle that has eluded architects and archaeologists for centuries.   Where did the Mayas mine their “Maya Blue” pigment?

Studying the mica deposits in Georgia somehow led to the subject of Georgia clays. Clay is one of that state’s most important exports. Georgia clays are characterized by a wide variety of colors and chemical characteristics.  Somewhere along the Wikipedia trail, Haskell stumbled onto a clay with the odd name of attapulgite, also known as palygorskite.  He continued reading the article:

The name attapulgite is derived from the U.S. town of Attapulgus, Georgia, in the extreme southwest corner of the state, where the mineral is abundant. It is known to have been a key constituent of the pigment called “Maya Blue”, which was used notably by the pre-Columbian Maya civilization of Mesoamerica on ceramics, sculptures, murals and (most probably) Maya textiles. The clay mineral was also used by the Maya as a curative for certain illnesses, and there is evidence to show it was also added to pottery temper.“