It’s the same old story: mainstream academics continually underestimate the complexity and sophistication of the indigenous people of the New World and it takes the tremendous persistence of an enterprising archaeologist to prove them wrong. This story shows how the trade networks in the Caribbean extended to Guatemala in Central America and Venezuela, Brazil and possibly Chile in South America by as early as 500 BC. Read the National Geographic story below: 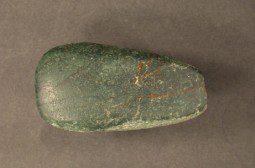 A discovery of ancient jade could shake up old notions of the New World before Columbus. Scientists say they have traced 1,500-year-old axe blades found in the eastern Caribbean to ancient jade mines in Central America 1,800 miles (2,900 kilometers) away, New York’s American Museum of Natural History announced late last month.

The blades were excavated in the late 1990s by a Canadian archaeologist on the island of Antigua in the West Indies. But the jade used to make the blades almost certainly came from Maya mines in distant Guatemala (see map of Guatemala), says mineralogist George Harlow of the American Museum of Natural History.

The find may call into question a once dominant archaeological picture of the pre-Columbian Caribbean. Previous theories held that a few big or budding civilizations existed on the mainland of Central America, with only isolated, village-based societies on islands in the Caribbean Sea.

The new analysis gives weight to a competing view, which suggests that organized, long-distance trade networks were based primarily on those islands. “There has been a closed mind-set that these [ancient] people out here were primitive, but we are learning there was a whole world out here we don’t yet fully know about,” said Reg Murphy, an archaeologist at the Museum of Antigua and Barbuda in St. John’s, Antigua. Murphy collaborated with Harlow on the research. Murphy says it’s likely that complex societies not only existed on the islands but also communicated with other cultures in South America along the Orinoco and Amazon Rivers.

“Those rivers [in South America] were highways of exchange that extended around the coast all the way to Guatemala,” he said.