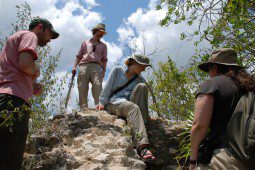 Explorers sit atop the ancient Maya pyramid at Vista Alegre. The pyramid stands 35-feet tall and may have been used by Maya lookouts to monitor approaching and departing canoes. (Credit: Image courtesy of Proyecto Costa Escondida Maritime Maya 2011 Expedition, NOAA-OER.)

NOAA-sponsored explorers are searching a wild, largely unexplored and forgotten coastline for evidence and artifacts of one of the greatest seafaring traditions of the ancient New World, where Maya traders once paddled massive dugout canoes filled with trade goods from across Mexico and Central America. One exploration goal is to discover the remains of a Maya trading canoe, described in A.D. 1502 by Christopher Columbus’ son Ferdinand, as holding 25 paddlers plus cargo and passengers.

Through the end of May, the team is exploring the remote jungle, mangrove forests and lagoons at the ancient port site of Vista Alegre (“happy view” in Spanish) where the Caribbean meets the Gulf of Mexico at the northeastern tip of the Yucatan Peninsula. Scientists believe the port was part of an important trading network and was used at various times between about 800 B.C. and A.D. 1521, the date scholars use to designate the start of Spanish rule.

“The maritime Maya have been described much like ancient seagoing Phoenicians. They traded extensively in a wide variety of goods, such as bulk cotton and salt, and likely incense from tree sap called copal, jade, obsidian, cacao, Quetzal and other tropical bird feathers, and even slaves,” said Dominique Rissolo, Ph.D., expedition co-chief scientist and director of the Waitt Institute in La Jolla, Calif. “Maya trade was far-ranging between the Veracruz coast of modern Mexico and the Gulf of Honduras, with each port a link in a chain connecting people and ideas. Yet there is still much to learn about the extensive history and importance of the maritime Maya and how they adapted to life by the sea.” 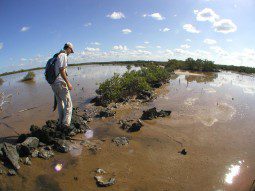 Dominique Rissolo walking the andador (walkway) between Vista Alegre and Templo Perdido. The andador runs from the southern part of Vista Alegre across tidal flats for over a kilometer until it terminates at Templo Perdido (Lost Temple), a small collapsed temple built atop a natural rise. (Credit: Image courtesy of Proyecto Costa Escondida Maritime Maya 2011 Expedition, NOAA-OER.)

““Maritime economies were strengthened and far-ranging trade routes were established between A.D. 850 and 1100,” said Jeffrey Glover, Ph.D., expedition co-chief scientist with Georgia State University’s Department of Anthropology in Atlanta. “It was during this time when the Maya at Chichen Itza relied increasingly on maritime commerce to maintain and extend control over much of the Yucatan peninsula. The period most associated with Maya seafaring followed, between A.D. 1100 and 1521.”

Recent archaeological work at Vista Alegre included completion of an architectural map of the site, test excavations to obtain cultural materials, and a 13-mile reconnaissance of coastal environments that revealed a number of small ancient and historical sites and cultural features.

During expeditions at the port site in 2005 and 2008, explorers mapped 29 structures including platforms, mounds, raised causeways, and a concrete-filled 35-foot tall, steep-sided pyramid that dominates the central plaza and appears to have been heavily damaged by hurricanes. Explorers believe the summit of the pyramid was also used by lookouts to monitor approaching and departing canoes. In addition to the features on the island, a narrow walkway connects the port to a collapsed and looted temple 0.8 miles away on the mainland.

The expedition team also includes co-chief scientists Patricia Beddows, Ph.D., of Northwestern University’s Department of Earth and Planetary Sciences in Evanston, Illinois; Beverly Goodman, Ph.D., of the Leon Charnet School of Marines Sciences at the University of Haifa, Israel; and Derek Smith, of the University of Washington Department of Biology. Emily McDonald of NOAA’s Office of Ocean Exploration and Researchis on the team to coordinate Web coverage.

Two scientists from Mexico and a small number of U.S. students will join parts of the expedition, which will also provide post-expedition technical reports to the Mexican National Institute of Anthropology and History. A goal of the exploration is to enable Mexico to better protect and preserve its coastal and submerged cultural resources. 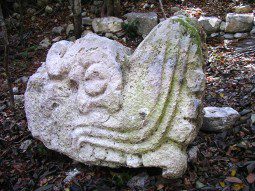 The carved serpent head found at the base of Vista Alegre’s temple structure. The carved serpent head most likely was one of a pair that would have been placed at the base of the balustrades flanking the main set of stairs leading to the top of the main temple structure. Team members found the serpent head in 2002 during the first visit to the site.(Credit: Image courtesy of Proyecto Costa Escondida Maritime Maya 2011 Expedition, NOAA-OER)

The explorers are contending with many of the same challenges that faced ancient Maya seafarers, including shelter — as some team members will be in tents and slung hammocks — the remoteness of the area that is accessible only by boat, the scarcity of fresh water, the possibility of tropical storms, and the danger and nuisance of a variety of local inhabitants, including mosquitoes, snakes, spiders and crocodiles.

“The Maya largely had to live off the land in this remote area where they found and used resources to survive. Like them, we have to search for scarce fresh water, but our challenges are more about making the research work in less than optimal conditions. It will involve some good MacGyvering,” said Glover, referring to the television actor who used ingenuity and materials at hand to invent his way out of a fix.

The expedition is part of Proyecto Costa Escondida (Hidden Coast Project), a long-term interdisciplinary research effort co-directed by Glover and Rissolo and focused on the dynamic relationship between the Maya and their coastal landscape.

Commemorating 10 years of ocean exploration, NOAA’s Office of Ocean Exploration and Research uses state-of-the-art technologies to explore the Earth’s largely unknown ocean in all its dimensions for the purpose of discovery and the advancement of knowledge.

NOAA’s mission is to understand and predict changes in the Earth’s environment, from the depths of the ocean to the surface of the sun, and to conserve and manage our coastal and marine resources. Visit us onFacebook. 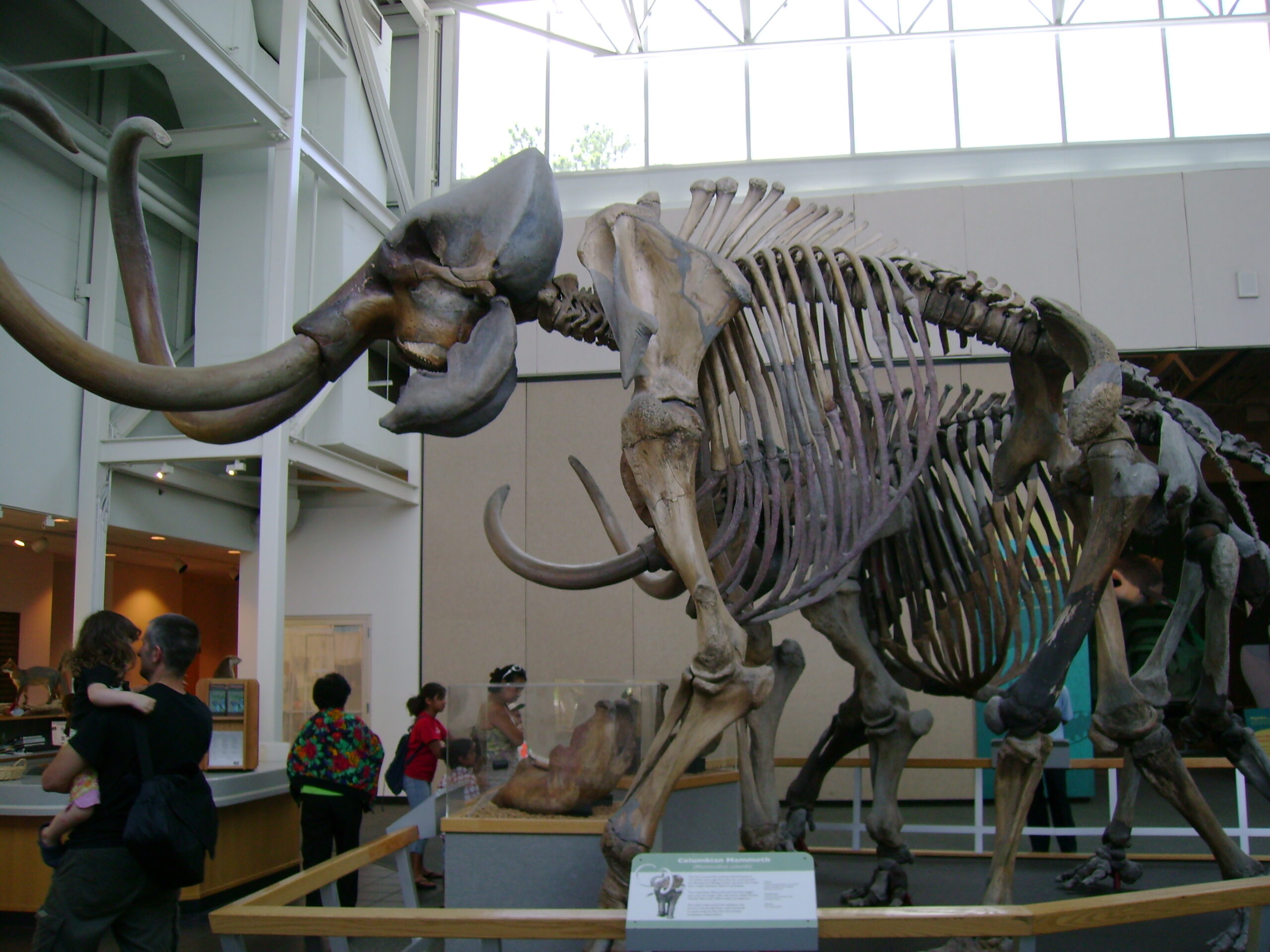