Many of the rock art designs in this report, especially the ‘dancing human’ designs,  are not just similar but identical to rock art motifs from around the world. Physicist and plasma researcher Anthony Peratt has argued that the reason for these similarities is the fact that all of these cultures were witnessing the same event, a high energy aurora, taking place in the sky produced by a super solar flare. Peratt has shown that many of these designs are identical to designs created by high energy plasma events which can be replicated in the laboratory. Peratt has documented and mapped thousands of examples of this rock art and has shown they always reflect the precise angle of view the artist would have had of this event based on his/her particular viewing location. Peratt argues that this proves the sun had a massive outburst in the past. Multiple Native American legends seem to record an event when the sun had such an enormous outburst. Other physicists have shown such a solar outburst likely led to the extinction of the megafauna at the end of the last Ice Age. Read the story below of these new finds in Mexico:

Rock-art has been discovered and recorded in forty sites in northeastern Guanajuato, Mexico, as part of an ongoing project carried out by researchers from the National Institute of Anthropology and History (INAH).

The majority of the images were created by hunter-gatherers who occupied the area during the 1-5 centuries AD, but religious iconography and inscriptions were also discovered dating to the colonial era, as well as the 19th and early 20th centuries. 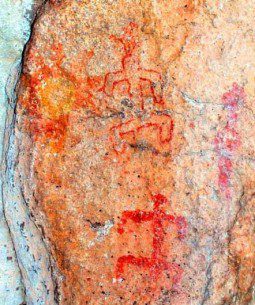 Images made by hunter gatherers and believed to be around two thousand years old. (Note the sun design to the left of the uppermost ‘dancing man’ design.) Image: Carlos Viramontes / INAH

The findings were announced by lead archaeologist Carlos Viramontes after four seasons of research in the area of Queretaro and Guanajuato semi-desert.

Altogether, since the late eighties over 70 rock-art sites have been recorded, with those falling into the two thousand year old hunter-gatherer category being preliminarily classified into two groups:

The sites known as Manitas, in the community of Tierra Blanca and Cerro Redondo represent good examples of the two classifications explains Viramontes. Tierra Blanca feels like a private ritual space, located near a 3,400 m high mountain peak in a difficult to access ravine. Depicted here are human figures, plants and animals – some of them fantastical creatures – as well as some geometric lines along with red and black painted hands.

On the other hand, Cerro Redondo appears to be a place where public rituals have taken place, involving large numbers of people. It is located on an easily accessible hillock in the middle of a plain.

Characteristic paint colours favoured by the hunter gatherers were yellow, red and black and used to paint human figures adorned with headdresses, skirts and cloaks, sometimes depicted carrying as yet unidentified objects and sometimes carrying bows and arrows in scenes of hunting and war.

“There is a great diversity of animals represented – mainly deer, but also dogs and insects resembling centipedes and spiders and many birds ” explained Viramontes.

The archaeologist theorises that for these hunter gatherers, the act of creating images on rock surfaces went beyond just recording daily life events and rituals; he contends that the rock face itself was a point of contact between the material and the spiritual worlds.

Apart from the two thousand year old rock-art recorded during the project, other types discovered relate to the colonial era and comprise crosses, shrines, altars and dated inscriptions. These were drawn with white pigmentation, typical of the Otomi people who settled in Guanajuato and Queretaro semi-desert, from the sixteenth century.

“As for the nineteenth century images, these are crudely produced by local ranchers using a red pigment and consist of crosses and altars along with human figures wearing hats and the baggy trousers of that period.

“And the twentieth century, we only found paintings of cups and crosses, probably made during the Cristero War in the 1920s. The local community were able to explain that during this time religious rites were performed under cover of the rock-shelters ” said Viramontes, who is currently producing a detailed report on all forty of the sites.

“We will continue working on location, research and protection of this rich heritage of northeastern Guanajuato rock-art,” concluded the researcher.