While at first the zigzagging shape of the wall seems random, it may give clues to the actual purpose of the wall. During the same time period that this wall was being constructed, Native Americans in southwest Georgia were producing a type of pottery with strange designs that have perplexed archaeologists for over a century. The pottery, called Weeden Island sacred pottery, contains zigzagging linear patterns very similar to the pattern made by the Fort Mountain stone wall. It has recently been argued that these zigzagging patterns were actually derived from astronomical observations of specific planets and represent their movement around the night sky over the course of months and years. Could Fort Mountain represent something similar and could it have been the place where such astronomical observations were made?

Even today we build our astronomical observatories at the tops of mountains. It’s a logical place to do so. It puts you closer to the thing you are observing. More importantly, for Native Americans living in a heavily wooded and forested environment, it puts you above the treetops and gives you a full 360 degree view of the night sky as well as the full sky dome from horizon to horizon.

The pattern of the Fort Mountain stone wall is very similar to the pattern on a pottery vessel found by archaeologist C. B. Moore. This vessel, referred to as “Vessel No. 1 from the Larger Mound Near Hare Hammock,” is decorated with two bird-head handles. Incised on both sides of the vessel is a zigzagging pattern. This pattern has been interpreted as representing the movement of the planets Venus and Mercury in the morning sky. (Venus is the brightest object in the eastern sky before sunrise and thus would have naturally drawn the attention of Native American sky gazers.) Could the zigzagging pattern of Fort Mountain’s stone wall be an attempt by early Native Americans to map upon the landscape the movements of these same bright objects in the early morning sky?

It is interesting to note that this same pottery vessel contains two ideas that were also being represented in stone around the same time period: bird effigies (Rock Eagle/Rock Hawk) and this zigzag design (Fort Mountain). Rock Eagle faces east and the Fort Mountain stone wall is oriented along an east-west axis. The pottery vessel was located in a grave on the eastern side of a burial mound and all the skulls within this mound were also facing east. The symbolism seems consistent.

Finally, astronomer John Burgess found that the wall was aligned with the summer solstice. As he noted in 1987: 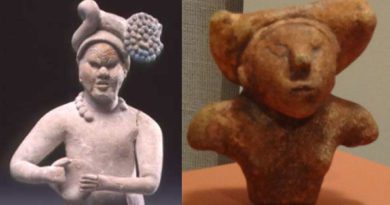