Was the course of life on the planet altered 12,900 years ago by a giant comet exploding over Canada? New evidence found by UC Assistant Professor of Anthropology Ken Tankersley and colleagues suggests the answer is affirmative. 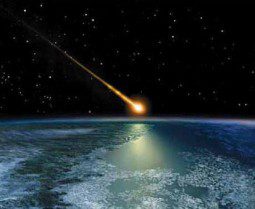 Geological evidence found in Ohio and Indiana in recent weeks is strengthening the case to attribute what happened 12,900 years ago in North America — when the end of the last Ice Age unexpectedly turned into a phase of extinction for animals and humans – to a cataclysmic comet or asteroid explosion over top of Canada.

A comet/asteroid theory advanced by Arizona-based geophysicist Allen West in the past two years says that an object from space exploded just above the earth’s surface at that time over modern-day Canada, sparking a massive shock wave and heat-generating event that set large parts of the northern hemisphere ablaze, setting the stage for the extinctions.

Now University of Cincinnati Assistant Professor of Anthropology Ken Tankersley, working in conjunction with Allen West and Indiana Geological Society Research Scientist Nelson R. Schaffer, has verified evidence from sites in Ohio and Indiana – including, locally, Hamilton and Clermont counties in Ohio and Brown County in Indiana – that offers the strongest support yet for the exploding comet/asteroid theory.

Samples of diamonds, gold and silver that have been found in the region have been conclusively sourced through X-ray diffractometry in the lab of UC Professor of Geology Warren Huff back to the diamond fields region of Canada.

The only plausible scenario available now for explaining their presence this far south is the kind of cataclysmic explosive event described by West’s theory. “We believe this is the strongest evidence yet indicating a comet impact in that time period,” says Tankersley.

Ironically, Tankersley had gone into the field with West believing he might be able to disprove West’s theory.

Tankersley was familiar through years of work in this area with the diamonds, gold and silver deposits, which at one point could be found in such abundance in this region that the Hopewell Indians who lived here about 2,000 years ago engaged in trade in these items.

Prevailing thought said that these deposits, which are found at a soil depth consistent with the time frame of the comet/asteroid event, had been brought south from the Great Lakes region by glaciers.

“My smoking gun to disprove (West) was going to be the gold, silver and diamonds,” Tankersley says. “But what I didn’t know at that point was a conclusion he had reached that he had not yet made public – that the likely point of impact for the comet wasn’t just anywhere over Canada, but located over Canada’s diamond-bearing fields. Instead of becoming the basis for rejecting his hypothesis, these items became the very best evidence to support it.”

Additional sourcing work is being done at the sites looking for iridium, micro-meteorites and nano-diamonds that bear the markers of the diamond-field region, which also should have been blasted by the impact into this region.

Much of the work is being done in Sheriden Cave in north-central Ohio’s Wyandot County, a rich repository of material dating back to the Ice Age.

Tankersley first came into contact with West and Schaffer when they were invited guests for interdisciplinary colloquia presented by UC’s Department of Geology this spring.

West presented on his theory that a large comet or asteroid, believed to be more than a mile in diameter, exploded just above the earth at a time when the last Ice Age appeared to be drawing to a close.

The timing attached to this theory of about 12,900 years ago is consistent with the known disappearances in North America of the wooly mammoth population and the first distinct human society to inhabit the continent, known as the Clovis civilization. At that time, climatic history suggests the Ice Age should have been drawing to a close, but a rapid change known as the Younger Dryas event, instead ushered in another 1,300 years of glacial conditions. A cataclysmic explosion consistent with West’s theory would have the potential to create the kind of atmospheric turmoil necessary to produce such conditions.

“The kind of evidence we are finding does suggest that climate change at the end of the last Ice Age was the result of a catastrophic event,” Tankersley says.

Currently, Tankersley can be seen in a new documentary airing on the National Geographic channel. The film“Asteroids” is part of that network’s “Naked Science” series.

The new discoveries made working with West and Schaffer will be incorporated into two more specials that Tankersley is currently involved with – one for the PBS series “Nova” and a second for the History Channel that will be filming Tankersley and his UC students in the field this summer. Another documentary, this one being produced by the Discovery Channel and the British public television network Channel 4, will also be following Tankersley and his students later this summer.

As more data continues to be compiled, Tankersley, West and Schaffer will be publishing about this newest twist in the search to explain the history of our planet and its climate.

Climate change is a favorite topic for Tankersley. “The ultimate importance of this kind of work is showing that we can’t control everything,” he says. “Our planet has been hit by asteroids many times throughout its history, and when that happens, it does produce climate change.”

A dog’s life long ago