The Academic establishment has long argued there were no civilizations much less advanced civilizations in Brazil or the Amazon. Apparently they were wrong. Read this story from the BBC about the discovery of a Brazilian Stonehenge:

Brazilian archaeologists have found an ancient stone structure in a remote corner of the Amazon that may cast new light on the region’s past.

The site, thought to be an observatory or place of worship, pre-dates European colonisation and is said to suggest a sophisticated knowledge of astronomy. Its appearance is being compared to the English site of Stonehenge.

It was traditionally thought that before European colonisation, the Amazon had no advanced societies. The archaeologists made the discovery in the state of Amapa, in the far north of Brazil. A total of 127 large blocks of stone were found driven into the ground on top of a hill.

Well preserved and each weighing several tons, the stones were arranged upright and evenly spaced. It is not yet known when the structure was built, but fragments of indigenous pottery found at the site are thought to be 2,000 years old. 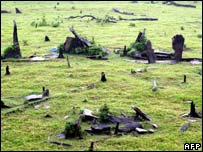 What impressed researchers was the sophistication of the construction. The stones appear to have been laid out to help pinpoint the winter solstice, when the sun is at its lowest in the sky.

It is thought the ancient people of the Amazon used the stars and phases of the moon to determine crop cycles.

Although the discovery at Amapa is being compared to Stonehenge, the ancient stone circle in southern England, the English site is considerably older.