ALBANY, Ga. — Amateur archeologists will get a chance to search this summer for the lost mission of Santa Isabel de Utinahica, built in the wilderness in the 1600s for a lone friar who was dispatched to evangelize among the Indians on the edge of Spain’s colonial empire.

“This was on the frontier,” said Dennis Blanton, curator of native American archaeology at Atlanta’s Fernbank Museum of Natural History. “It was perched on the edge of the known world in this hemisphere. A barefoot Franciscan was dropped alone into alien territory and given his marching orders to convert these Indians and probably gather a certain amount of intelligence.”

Fernbank and the Georgia Department of Natural Resources’ Historic Preservation Division have teamed up to launch the exploration in June near the rural south Georgia town of Jacksonville, about 160 miles south of Atlanta.

“You’ll get a sense of what these friars were dealing with,” said Blanton, who will supervise the work. “We want to put people in the crucible and be a part of this educational experience.”

The program is intended to give adults and high school and college students an opportunity to take part in an excavation and to heighten appreciation for the state’s history and archaeological treasures. The amateurs will be guided by professional archeologists.

“This really is the perfect example of how archaeology contributes,” Blanton said. “If we want to understand the situation on the ground in any detail, we’ve got to go move some earth and that’s what we want to do.”

The site is in a Telfair County forest in an area known as “the forks,” where the Ocmulgee and Oconee rivers converge to form the Altamaha River. Based on historical accounts and American Indian artifacts, there’s no doubt there was a mission in the area, one of the most remote of several dozen missions set up by the Spanish in northern Florida and southern Georgia, Blanton said.

The mission was named Utinahica after the Indians that lived in the area, Blanton said. They were ancestors to the well-known Creek Indians.

Archeologists have already surveyed the area using remote sensing devices and plan to check it further with ground penetrating radar, he said.

Spanish artifacts have already been recovered at three sites and those will be targeted first, Blanton said.

“We want to set a good model for what ought to be done on these places,” he said. “We want people to come away with an appreciation of how it’s done well. It’ll be thoughtful and systematic. By the end of the summer, we’ll be targeting places that look particularly interesting.”

Blanton has hired two assistants to help with the program, which is expected to be offered again during the summer of 2007. Teachers who participate can get continuing education credits.

“My strongest personal interest is to get people in middle and south Georgia deeply involved,” he said. “But we’ve got people coming from as far away as Oklahoma. It’s really appealed to a lot of folks.”

Most Georgians know about the role of the English and Gen. James Oglethorpe, who arrived with a band of settlers in 1733 to establish Savannah and the Georgia colony, but they know little about the role of the Spanish, who had a mission on St. Catherines Island south of Savannah that was active from about 1575 to 1680, Blanton said.

“There’s nearly 200 years of prior European history that had a huge bearing on the later history we attribute to the English,” Blanton said. “What we’re trying to do is give people a healthy reminder of this longer history, which is also pretty interesting history. It’s almost like reading fiction.” 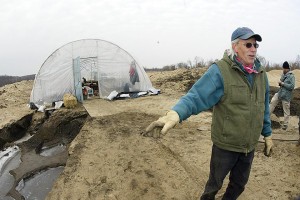