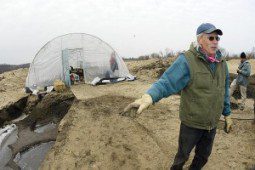 Some 1,700 years ago, the people who live in what is known officially as archaeological site “13LA582” west of Oakville, Iowa, were hunter-gatherers who also grew native crops like sunflower seeds.

They lived in a doughnut-shaped village around a communal area and occupied 20 to 25 tree branch and bark wigwams capable of housing up to 10 people each.

The group is believed to be part of the Weaver culture located not far from the confluence of the Iowa and Cedar rivers in Louisa County where fish and game were plentiful, said Dave Benn, a research archaeologist. He was hired to excavate the site as the U.S. Army Corps of Engineers sited a new location for a levee to protect the town battered by flooding last year.

“They ate a huge number of fish, and we also found turtle and deer bones,” Benn said of the diet of the people about whom little is known. “They lived well, they ate well, and there was a lot of food here.”

A team of archaeologists toiling under a plastic canopy off Louisa County Road H22 are carefully unearthing remnants of the village from a 10-foot-by-213-foot trench cut right through the middle of it. They are hoping to gain a greater insight into the lives of these prehistoric people who once flourished throughout the region.

“There were villages up and down the banks of rivers all through the area,” said Benn. “This one is a particularly good find, probably the best I’ve seen in a decade.”

In eight weeks of meticulous digging and cataloging, the site has yielded 100,000 artifacts, Benn said. Many are unrecognizable bone fragments and pottery shards, but there are also stone arrowheads and spear points, stone axe heads and pits laden with ancient trash that give a glimpse of how the village lived.