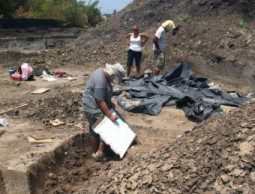 A large suburb of the Native American metropolis of Cahokia has been unearthed in a road construction project in East St. Louis, Missouri. Details from the article:

According to Cahokia Mounds’ website, the city acted as a base for all Mississippians and reached its peak population between 1050 and 1150. It was a huge mecca for people living in the Midwest and beyond.

“Essentially, where there wasn’t anything before that resembled a city, the Mississippians came and laid out plans to build a city,” Galloy said. It took “tons of time and labor.”

It still isn’t clear how the East St. Louis site was connected to the Cahokia site, or how large the site was.

One reason East St. Louis is harder to define is its location in a flood plain. In the 1800s, the city passed an ordinance requiring streets and buildings to be built up on three or four feet of fill, Galloy said, to help prevent flood damage.

“What that did was it covered all of East St. Louis,” he said. Usually, “when archaeologists go out to look for sites, we can see artifacts on the surface. Well, in East St. Louis, we can’t even see the original surface.”

Without clues on the surface, archaeologists are finding several unexpected features in unexpected areas in East St. Louis.